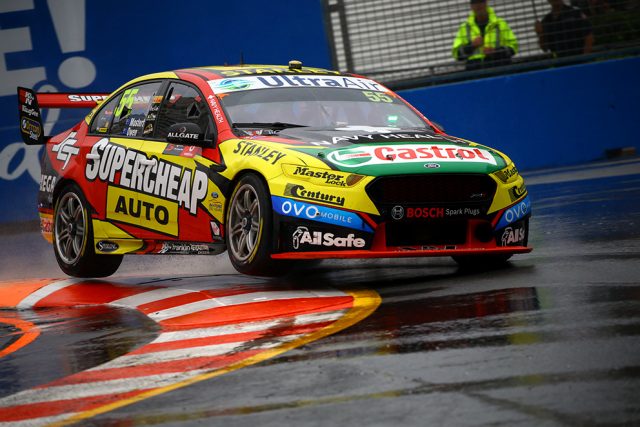 The #55 Supercheap Auto Falcon of Chaz Mostert and Steve Owen

Chaz Mostert and Steve Owen lead the Pirtek Enduro Cup with one race remaining after taking out Race 21 at the Vodafone Gold Coast 600.

Cameron Waters and Richie Stanaway helped to give Prodrive Racing Australia a one-two in the Saturday race in Surfers Paradise, and now hold the same position in the Pirtek Enduro Cup.

Cars #55 and #6 had left Bathurst tied for second position, but moved ahead of Fabian Coulthard and Tony D’Alberto by virtue of their strong results.

The previous leaders, on the other hand, lacked pace in Race 21 before Coulthard turned around Nick Percat.

While the #12 Shell V-Power Racing Ford crossed the line in 10th position, Coulthard had a 15-second time penalty hanging over his head for the indiscretion which put them back to 19th.

“I think in ’14 when we won Bathurst we came up second in the Pirtek Enduro Cup.

“We missed out on Bathurst this year so it’d be cool to take out another trophy for either one of us guys.

“I’m a bit greedy, I’d like to get it, but I’m sure Cam’s going to be pushing me pretty hard tomorrow.

“If I don’t get it, I’m happy for these guys next to us (Waters/Stanaway) to get it; they’ve done a pretty good job through these enduro races as well.”

Ford is heavily favoured to win the Pirtek Enduro Cup for the first time with Falcon entries filling the first three positions.

The best Holdens are those of Bathurst 1000 winners David Reynolds/Luke Youlden, who finished 17th after coming back from a lap down prior to the Safety Car, and Shane van Gisbergen/Matt Campbell.

Van Gisbergen won the series within a series last year, but faces an uphill battle to overturn a 102-point deficit to Mostert/Owen with 150 points awarded to tomorrow’s race winner.