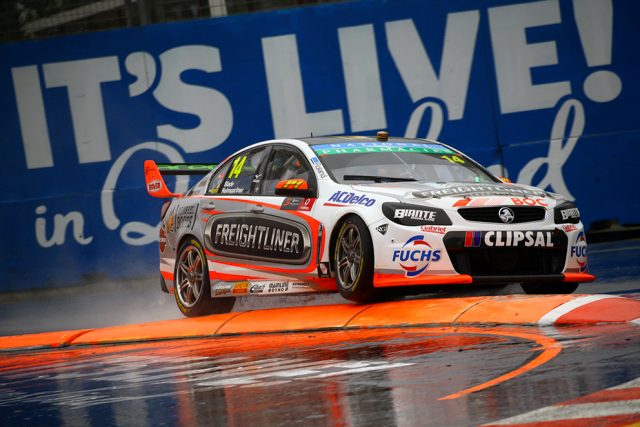 Andre Heimgartner during the first stint of Race 21

Tim Slade has described his and Andre Heimgartner’s podium finish as “awesome” despite losing the race lead due to a slow pit stop.

Heimgartner drove a brilliant stint in the #14 Freightliner Commodore, moving from third on the grid into the race lead on Lap 8 and amassing an 18-second lead by the time he handed over the car.

Slade held top spot, albeit with a diminishing lead, until the only Safety Car of the race on lap 55 prompted the final pit stops.

A slow left-rear tyre change, caused when a jack sunk into the road surface, cost Slade two positions and he ran third thereafter, despite late pressure from Shane van Gisbergen.

“When I first started my stint, I knew we had a fairly big gap, so took a little while to get going,” recounted Slade.

“I just didn’t want to spear it off down an escape road by pushing too hard too early.

“Then we had that little drama in the pits with the air jack, the back of the car wouldn’t lift off, so we couldn’t get the tyre off.

“We tuned the car up a little bit with the bars towards the end there and managed to hold off Shane there.

“(It’s an) awesome result, I am really happy with that and especially after the run we have had as a team of late,” he added, alluding to a disqualification at Sandown and his dehydration scare due to a cooling failure at Bathurst.

When pressed on his feelings about the pit stop specifically, Slade played down his disappointment in light of the speed shown by eventual race winner Chaz Mostert.

“At the time, yeah (I was disappointed), but then seeing how fast Chaz took off, we think he would have been pretty hard to hold off there,” he explained.

“There is a little bit of a disappointment that you lose track position that way and it is hard to pass in these conditions but I am not too disappointed.

“I am pretty happy with where we ended up.”

A track repair crew was working on the road surface within the Brad Jones Racing pit box after the race, with the fix to be finished tomorrow morning.

Slade also praised Heimgartner for his “mega job” in the opening stint of the race, but the Aucklander refuted suggestions that he would use the performance to try and springboard back into a full-time Supercars seat.

Heimgartner repeated his earlier comments, when he had not been called up as an enduro co-driver, that overseas GT racing remains his career focus for the time being.

“At the moment I am just concentrating on my GT stuff,” said the man who is currently second in Carrera Cup Australia.

“I am really enjoying being in a good car, able to win races and fight for championships, and that is what I am concentrating on at the moment.

“If something pops up in Supercars, we will look at it but at this stage it is more based on that sort of stuff.

The New Zealander contrasted his current situation to a season of toil last year at Lucas Dumbrell Motorsport, a team which he had considered returning to in 2017 before opting to step back into Carrera Cup.

“I am just really enjoying my racing now, which is the main thing,” he added.

“Being down the back battling in Supercars, you tend to forget the reason why you are racing and then you almost don’t want to do it at the end.

“Just getting my love of motorsport back, getting some good results like this is really good.”