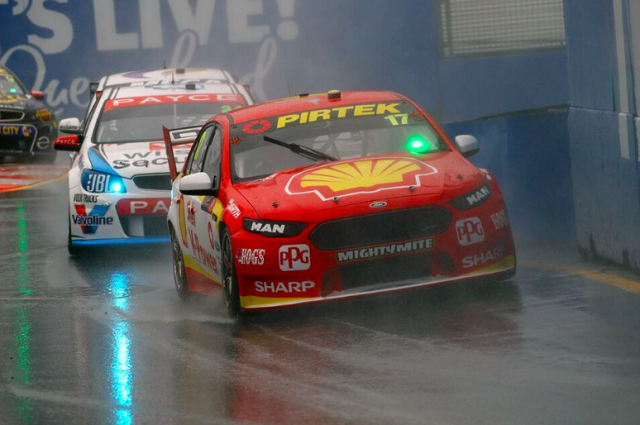 Alex Premat has called for Supercars to review its procedures for future wet races after suggesting the category was lucky to avoid a major incident in Race 21 at the Vodafone Gold Coast 600.

The Shell V-Power Racing co-driver is adamant that race officials should have called a Safety Car early in the race due to a severe and dangerous lack of visibility.

Premat, who partnered Scott McLaughlin, says the conditions were the worst he has ever encountered during a career that includes stints in GP2 (now Formula 2), DTM and top flight sportscars.

He feels the risk was too high for drivers claiming he was ‘scared’ inside the car and fearful of a major incident.

“Honestly I think Supercars need to review this,” Premat told Speedcafe.com of the decision not to deploy a Safety Car

“If one day they want to have a bad accident then this is how it will happen because it is very bad.

“The conditions were very bad especially the first six or seven laps when you are at the back.

“There should have been a Safety Car start. The spray was so huge I couldn’t see anything. There was no visibility.

“I was just guessing I was scared in the car.

“I have been racing in wet conditions in other series and never had these conditions.

“I don’t think it (the start) should have been delayed because it is hard to predict the weather.

“After Lap 1, I said to the guys ‘it is crazy, it should be a Safety Car’, maybe Supercars should listen to the drivers. We don’t want to hurt anyone.

“I was not happy. My feeling that is not alright.”

Premat has aired his grievances with Race Director Tim Schenken and Driving Standards Advisor Craig Baird, who were unavailable for comment in response to Premat’s view.

It proved to be an eventful race for the Frenchman who suffered a spin on Lap 5 which dropped him to the rear of the field.

The car eventually came home in 12th position once McLaughlin took over the Falcon on Lap 35.

“The car was not as quick as in the dry condition,” added Premat.

“Scotty only had the 15th or 16th fastest time in the wet, so we need to review what is wrong on the car.

“We need to find a solution to be on the same game as Prodrive.”