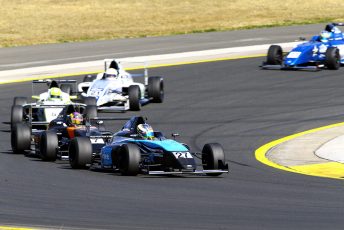 Michael Patrizi will enter a team in the CAMS Jayco Australian Formula 4 Championship next year.

Patrizicorse will run two cars in 2018 in an expansion of the operation which Patrizi established as a karting team in 2009.

The former Supercars driver has since turned the Gold Coast-based team into one of Australia’s leading karting squads and wants to use F4 to create his own ladder system.

“We are thrilled to announce that Patrizicorse enters its next chapter of its business, stepping up into the Formula 4 category,” Patrizi told Speedcafe.com.

“It’s something that’s been one of my goals as a business and we just think Formula 4 is the perfect and most logical step for the Australian karter to take after they finish go karting.”

The team is also officially the first to purchase its own cars from CAMS, after it opened up the championship beyond a lease-only model this year.

While drivers have not been announced, Patrizi did hint at a big-name engineer running the program.

“Our engineer has significant experience in very high-level motor racing overseas and has returned to Australia for some family time,” he said.

“It’s going to be quite cool having someone of his level heading up our Formula 4 program, which will give the drivers that edge, and it take Patrizicorse from what it is in karting to what it will be in Formula 4, I hope.”

While drawing drivers internally from his karting ranks is an obvious step, Patrizi stated that he was open to drivers from other outfits.

While Kremers is continuing to forge his path in karts, Patrizi said that he may field other international drivers in Formula 4 in the future.

“We are already in talks with some international managers and they see our program as a really good one and a fit for their drivers to enter here in the coming years whilst they’re doing their final season of karting,” he explained.

“It’s something they used to do with New Zealand with the TRS (Toyota Racing Series) program, and that’s something I’ll definitely look at.”

The 2017 Australian Formula 4 Championship wraps up this weekend at the Vodafone Gold Coast 600.