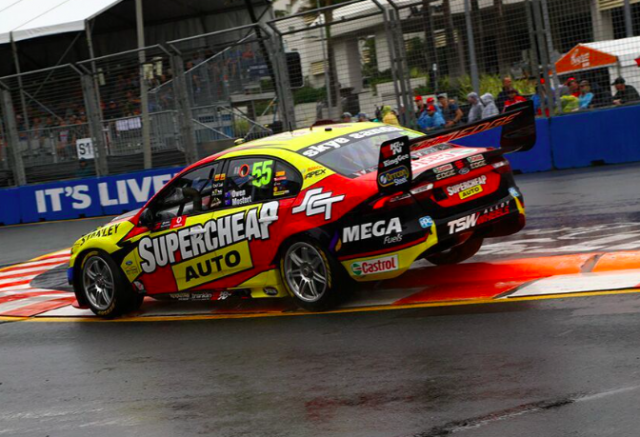 Chaz Mostert and Steve Owen combined to deliver victory after an eventful run to the flag in treacherous wet conditions at the Vodafone Gold Coast 600.

The race could prove a significant moment in the championship race as the pole-sitters took advantage of drama that hit three of the five title contenders.

Owen led the early laps from pole before losing the lead to a fast starting Freightliner Racing Commodore of Tim Slade and Andre Heimgartner, with the latter at the wheel.

The Supercheap Ford dropped to fifth after heavy contact from Paul Dumbrell (#88 Red Bull Holden) in the opening stint, but bounced back following a Safety Car on Lap 55, caused by Lee Holdsworth (Preston Hire Racing).

Mostert surged by Prodrive team-mate Cameron Waters, who emerged in the lead on the restart, before taking a comfortable victory in a time certain finish.

Waters settled for second having been aided by a stunning stint from co-driver Richie Stanaway, who climbed to second from 14th on the grid.

Slade brought the Brad Jones Racing Holden home in third after its healthy lead was wiped out following a jack issue in the pits, that held up the left rear tyre change.

Shane van Gisbergen (Red Bull Holden) produced a sterling drive to recover from ninth to fourth in the final stint, while team-mate Jamie Whincup slid back to sixth, having run third for large parts of the opening stint.

Whincup had to recover from a 15 second penalty for contact on Owen instigated by co-driver Dumbrell.

Worse was to befall the Shell V-Power Racing Fords as Scott McLaughlin finished 12th after Alex Premat spun the Falcon on lap five and dropped to the rear of the field.

Coulthard continues to lead the championship by 37 points with just 121 covering the top four.

The vast majority of teams elected to put co-drivers in for the start as the rain intensified on the grid.

Owen led the field away from the start with Dumbrell second and Heimgartner following closely third.

The opening laps were devoid of drama until Premat’s moment at Turn 11, when he checked up and lost the rear behind a slower train of cars.

Meanwhile, at the front Heimgartner produced a stunning opening stint which saw him pass Dumbrell and then take the lead from Owen on lap 8.

Prodrive duo Stanaway and Garry Jacobson also lit up the timing screens as they surged from 14th and 22nd into the top six before the latter pitted for fuel on lap 16.

As Heimgartner extended his lead to 18 seconds, there was plenty of action behind when Dumbrell made contact with Owen at the first chicane, leaving the Ford briefly broadside on the track.

Stanaway took advantage to climb to second behind Heimgartner before the first round of pit stops at one third distance.

Slade took over the Brad Jones Holden from Heimgartner with a 19s lead over Waters, while the out-of-sequence Jacobson moved to third.

Nissan Motorsport’s Michael Caruso emerged in fourth ahead of Mostert, who passed Whincup following his 15s penalty during the first stop.

Title contenders van Gisbergen emerged in 11th after Campbell’s stint with Coulthard a net 10th and McLaughlin in 17th.

The race was neutralised with 52 minutes remaining when the Safety Car was deployed when Holdsworth punted the tyre bundle onto the race track at the beachside chicane.

The stoppage triggered the second round of pit stops and a crucial moment in the race.

Leader Slade rejoined in third after a pit stop drama while Waters assumed the lead from Mostert.

Mostert quickly emerged as the pacesetter on the restart and it wasn’t long before he passed Waters for the lead, where he stayed until the chequered flag.

Waters finished second ahead of Slade, while Caruso brought the #23 Nissan home in a fine fifth.

The Todd Kelly/Jack Le Brocq Nissan retired on lap 45 after suffering extensive damage to the front and rear, following a collision with Garth Tander (Garry Rogers Mototsport) at Turn 2.

Holdsworth also joined the list of retirements along wth the #3 of Aaren Russell and Taz Douglas.