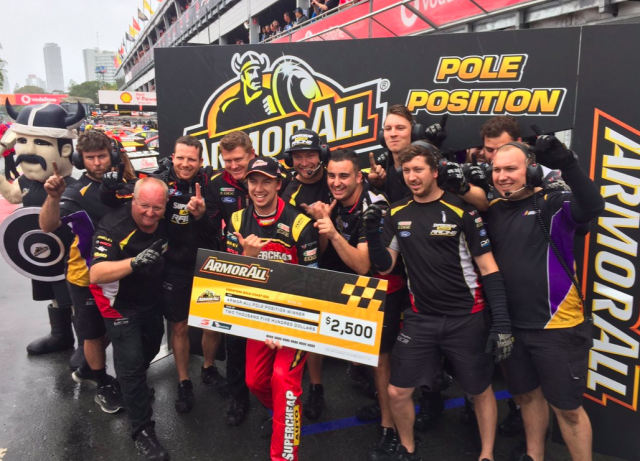 Chaz Mostert celebrates his first pole position of the season

Chaz Mostert showed his class in difficult wet conditions to claim the Armor All Pole Position for Race 21 at the Vodafone Gold Coast 600.

The slippery track conditions provided a shake up to the grid for this afternoon’s race as drivers were pushed to the limit on the 2.96km circuit.

Mostert set the initial pace with a 1:24s effort but as the session progressed he went on to post a 1:21.54s effort to shoot back to the top of the times.

His time arrived just as the red flags were shown with two and half minutes remaining when Erebus Motorsport’s Dale Wood found the tyre barriers at Turn 3, causing damage to the front of the Holden.

The rain intensified when the session resumed restricting drivers from improving upon their times.

“It was a battle out there and I was very lucky to get a good time,” said Mostert.

“The car was good in the dry and worked well in the wet, but it is very sketchy out there and very easy to make a mistake.”

Early pacesetter Jamie Whincup will join Mostert on the front row despite a scary moment that saw the Triple Eight driver slide into the barriers at Turn 11.

Coulthard was lucky to avoid the concrete wall when he had a wild spin at Turn 11.

Shane van Gisbergen, who topped the session early in the running, had to settle for seventh, while the top 10 was completed by Mark Winterbottom (Prodrive), Todd Kelly (Nissan Motorsport) and Lee Holdsworth (Preston Hire Racing).

Craig Lowndes just missed out on the top 10 in 11th position, ahead of Scott Pye, who was the top Mobil 1 HSV Racing runner in 13th spot.

Lucas Dumbrell Motorsport’s Alex Rullo was the only other driver to suffer a spin during the session, when he lost the rear of his Holden at Turn 11.