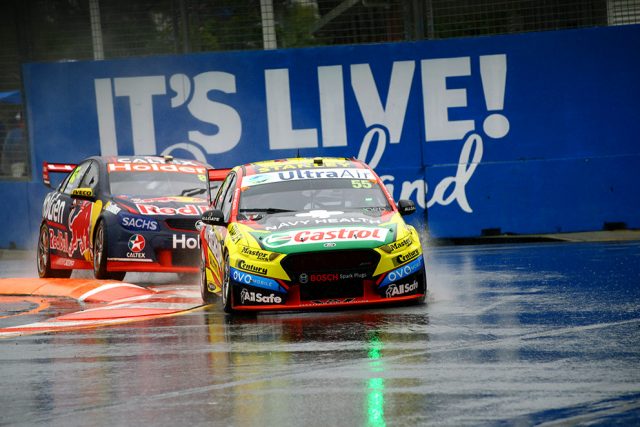 Dumbrell tails Owen prior to the incident

Chaz Mostert has questioned the consistency of stewards’ decisions in the wake of a time penalty issued to Paul Dumbrell during Race 21 of the Supercars Championship at Surfers Paradise.

Mostert’s co-driver Steve Owen was on the receiving end of an error by Dumbrell, who locked up at the first chicane and made heavy contact in the door of the #55 Supercheap Auto Falcon on Lap 28.

Richie Stanaway passed both cars amid the drama, leaving Dumbrell a net neutral in third position as Owen attempted to regroup in fifth.

While the #88 Red Bull Commodore was issued a 15-second hold penalty to be served at its next pit stop, Jamie Whincup still exited the pits in front of Mostert for their respective first stints, causing the Prodrive pilot to suggest that the punishment did not fit the crime.

The comments come just under a fortnight after the Supercheap Auto Bathurst 1000, when Mostert copped the greater penalty of a drive-through for turning around Garth Tander at Hell Corner.

That incident caused damage to both their cars and that of team-mates Cameron Waters/Richie Stanaway.

“I definitely got a bit vocal about it because I don’t think his penalty was enough for what it was,” declared Mostert.

“We still came out behind him in the pits when he obviously drilled us from behind, so (there is) inconsistency with the penalties going on out there.

“I had a similar thing going on at Bathurst and got a pit lane penalty so it’s pretty tricky out there at the moment for, I guess, the standards.”

At Bathurst, stewards found “a breach of Schedule B2 Rule 2.2 (Careless Driving) causing contact with Car #33 at Turn 1 on Lap 144 causing Car #33, Garth Tander, to spin and lose positions.”

The Stewards Summary from Race 21 on the Gold Coast described Dumbrell’s actions as “a driving infringement, contact with Car #55, Mostert/Owen.”