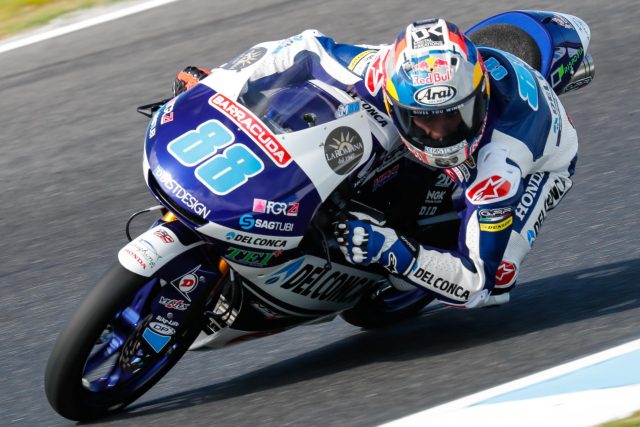 Jorge Martin has claimed his eighth Moto3 pole position of 2017 as he emerged on top in qualifying for tomorrow’s Grand Prix at Phillip Island.

Martin set his best lap midway through the session, his 1:37.030s proving two tenths clear of Gabriel Rodrigo in second.

Championship leader Joan Mir will start third ahead of Juanfran Guevara, with Romano Fenati also on the second row in fifth.

Fenati’s best lap came while trailing Mir around the Phillip Island circuit in the early part of the session, much to Mir’s frustration.

Without Mir’s tow later, Fenati struggled to lap within a second of the 1:37.680s lap he set early on.

The KTM pairing of Rodrigo and Guevara also circulated together, helping the pair qualify towards the front of the grid.

Rain at the Southern Loop in the latter stages of the session saw times slow, confirming Martin’s pole position.

Australian wildcard tom Toparis qualified 31st and last with a time of 1:42.218s on his KTM.