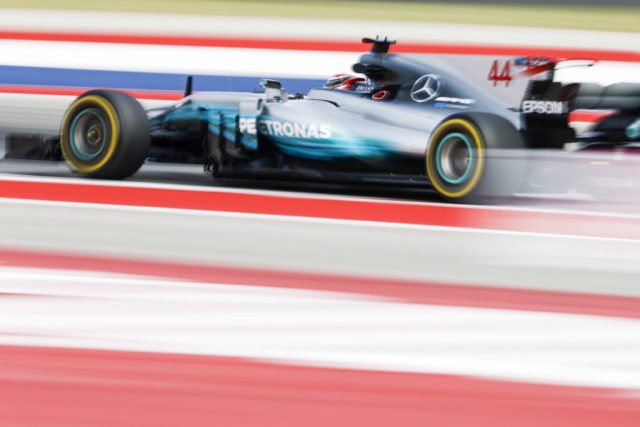 Lewis Hamilton has topped both of Friday’s Formula 1 practice sessions ahead of this weekend’s United States Grand Prix at the Circuit of the Americas.

Hamilton was only third fastest after the early runs. During that phase, Daniel Ricciardo used super-softs to set the pace ahead of Verstappen, who like Hamilton used softs early on.

Hamilton had a brief off-track moment at the penultimate corner during that run, but made no mistake when he returned to the track on ultra-softs as he went quickest after 35 minutes.

By that stage, Valtteri Bottas had already knocked Ricciardo off top spot, but Mercedes driver Bottas ultimately had to settle for fourth fastest, just under a tenth slower than Ferrari’s Sebastian Vettel.

Vettel survived a spin into the gravel shortly before the 20-minute mark, when the rear snapped away on turn-in to the penultimate corner.

Vettel was able to dig himself out and recover to the pits, before returning for his performance run shortly before the halfway mark of the 90-minute session.

He later complained of a potential problem with the front axle, which he described as feeling “a bit like jelly”, contributing to him completing only 11 laps.

Red Bull’s Ricciardo improved his first-run time by almost seven-tenths after switching to the ultra-softs, but it was only good enough for fifth, ahead of the second Ferrari of Kimi Raikkonen.

Fernando Alonso’s McLaren-Honda was best-of-the-rest in seventh, having briefly been as high as fourth thanks to putting in his quick lap in earlier than most.

Williams driver Felipe Massa was eighth, with Force India pairing Sergio Perez and Esteban Ocon rounding out the top 10 – with the trio separated by just three-hundredths of a second.

Renault debutant Carlos Sainz Jr was the penultimate driver to complete his performance run on ultra-softs, taking 11th shortly before the one-hour mark.

The last driver to do so was team-mate Nico Hulkenberg, who suffered an engine glitch that kept him in the garage after his first run and only posted his time just inside the final 20 minutes.

Daniil Kvyat, who sat out the first session to allow Sean Gelael some mileage despite this being the Russian’s first time in the Toro Rosso since September’s Singapore Grand Prix, was 13th fastest.

Kevin Magnussen, who had a high-speed spin early in the session, was the best of the Haas-Ferraris in 14th.

Stoffel Vandoorne and Lance Stroll were 15th and 16th, ahead of F1 debutant Brendon Hartley, who improved several times on his ultra-softs to end his first day in grand prix racing 17th fastest.

Pascal Wehrlein missed the first session, with Charles Leclerc taking his Sauber seat, but recovered well to post the 18th-fastest time, ahead of team-mate Marcus Ericsson and Romain Grosjean’s Haas.