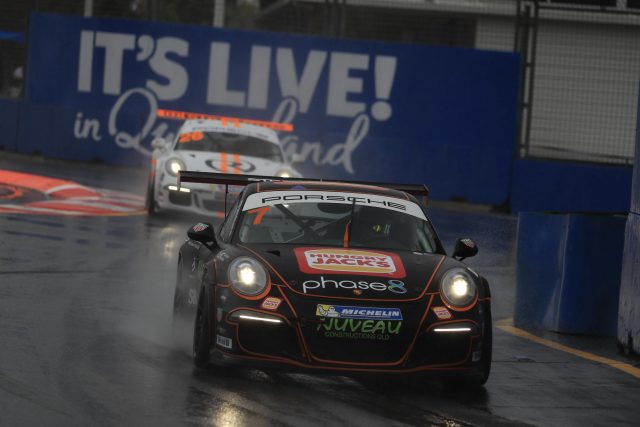 Jaxon Evans was a shining light in the wet

Jaxon Evans has won a rain-soaked opening race of the Carrera Cup on the streets of the Gold Coast as David Wall closed to within sight of the title.

The rain brought a start behind the Safety Car with Andre Heimgartner leading the field away from Sonic team-mate Nick McBride.

Evans made quick work of McBride before pressing Heimgartner and taking the lead on lap #5 and charging out to an 11-sec lead by the finish.

Attention then switched to the championship combatants in Heimgartner and Wall. Points leader Wall having a couple of looks before out dragging Heimgartner to the finish line to score second by 0.0357-sec.

Claiming fourth was Dylan O’Keeffe who came from seventh on the grid ahead of Michael Almond.

Carrera Cup has two more races tomorrow, with the opening race being a scheduled 28-lap race as part of the endurance cup starting at 8:50am local time. The final races of the season is scheduled for 1:05pm.

VIDEO:Evans and Grove speak after the opening race