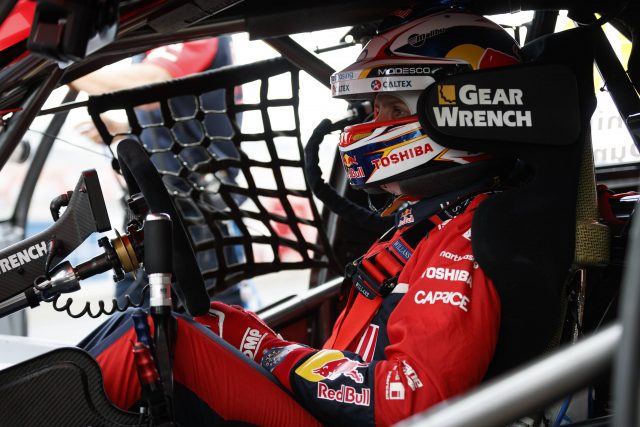 Showers are expected throughout Saturday’s schedule with forecasts suggesting a 95 percent chance of precipitation, providing teams and drivers a curveball.

Wet weather is a rarity at the Gold Coast 600 in recent years which has further heightened the challenge for drivers on the tricky 2.96km street circuit.

Whincup, who topped Friday’s final practice with a record 1:09.91s in dry conditions, expects Saturday’s rain to test field to the limit.

The inclement weather could also prove to be an important variable in the title race with just 289 points separating the top five.

“We were reasonably quick in the wet at Bathurst, I think we will all take out the work we did at Bathurst, car 55 here is very, very fast, so, we have some work to do, but roll on.

“You certainly can’t win it here this weekend but you could possibly lose it, with only two rounds to go. Scoring points and having a clean run is certainly critical.”

Fellow title rival Scott McLaughlin has never run in the wet conditions at the circuit and believes showers will make the track harder to drive than Mount Panorama in the same conditions.

The Shell V-Power Racing driver, who is third in the championship, ended up fourth on the timesheets in the dry during Practice 3.

“It is going to crazy. If it rains it is going to be harder than Bathurst for sure,” McLaughlin told Speedcafe.com.

“It is harder because there are so many painted lines and there isn’t much run off.

“At Bathurst there isn’t much run off but here its basically just concrete.

“It is going to be hard to know how much kerb to take if any.

“It is going to be a real game changer in the wet, most of the guys have driven here in those conditions.”

The Vodafone Gold Coast 600 continues on Saturday with qualifying for Race 21 scheduled for 1120 local time.