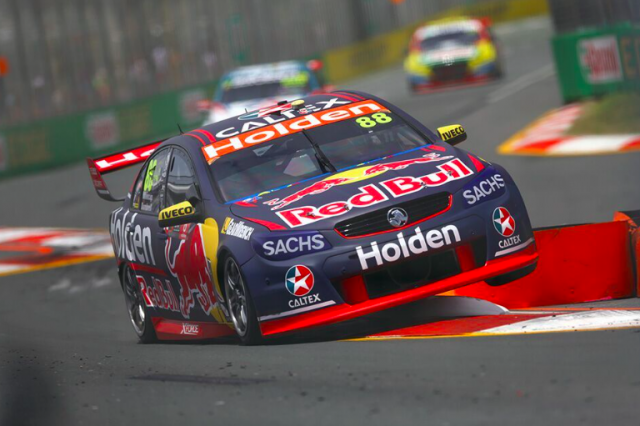 Jamie Whincup posted the fastest ever Supercars lap at Surfers Paradise to top the final practice session for the Vodafone Gold Coast 600.

The Triple Eight driver clocked a stunning 1:09.91s effort in the dying moments of a truncated 30 minute session.

“I did an eleven and a half (1:11.5s lap) this morning and then Paul Dumbrell went out and did a 11.1s. I thought I might have been out for qually, PD in,” joked Whincup.

“Thankfully I recovered in Practice 3. The track was perfect. These new tyres are grippy, compared to last year, plenty of drive out of the hairpins.

“We are good, but we will wait for the rain to come down tonight and all day tomorrow and see what the wet set-up is like.”

A flurry of fast times arrived in the final minutes as teams elected to complete green tyre runs.

Practice 1 pacesetter Chaz Mostert was among a group of drivers to improve late on to claim second, 0.18s adrift of Whincup, while Bathurst 1000 winner David Reynolds was third for Erebus Motorsport.

The session was red flagged twice with the second arriving seven minutes from the end when Garry Rogers Motorsport’s James Moffat found the wall hard at Turn 11.

It appeared Moffat clipped the inside wall which resulted in the Holden making front end contact with the tyre barrier on the corner exit.

“I was just pushing too hard and I made a mistake,” said Moffat.

“It was silly. I don’t know how the car will be but it was quite a head on impact.”

The session was halted briefly in the opening minutes when the tyre bundle at Turn 15 became dislodged.

Meanwhile, Scott McLaughlin improved in the final moments to secure fourth in the #17 Shell Ford, ahead of Shan van Gisbergen, who had topped the session briefly following the resumption after the second red flag.

Fabian Coulthard was sixth fastest in the #12 Shell Ford ahead of Prodrive duo Mark Winterbottom and Cameron Waters.

Todd Kelly emerged as the top Nissan Motorsport runner in ninth, while Craig Lowndes round out the top 10.

It proved to be an eventful end to his session as the Triple Eight driver locked the rears and spun at Turn 4.

Lowndes then copped a hit from Lucas Dumbrell Motorsport’s Alex Rullo, although both were able to continue without issue.

The Supercars field will return to the track on Saturday morning for Race 21 Qualifying at 1120 local time.