James Duckworth started Round 6 of Aussie Racing Cars with a win under Safety Car at the Vodafone Gold Coast 600.

Duckworth, who qualified on pole, led the field away before the first Safety Car was called at the end of Lap 1.

Ian Chivas had lost the rear end of his car and headbutted the wall exiting Turn 13.

Green flag running was brief again when the race restarted on Lap 5 as Madison Dunston found the wall at the Beach Chicane.

Dunston arrived off-line and attempted to drive past Michael Rinkin but was instead turned around.

The cars trundled around under yellow flags until taking the chequered flag, Duckworth notching his fourth win in the last five races from Craig Woods and Blake Sciberras.

Earlier in Practice, Duckworth escaped major damage when he was turned into the main straight wall by Jaie Robson.

Robson, who was being passed by Duckworth, was issued a grid penalty of three positions, but failed to finish Race 1 after starting fifth. Jane (#27 Bob Jane T-Marts Commodore) enjoyed two spells at the top of the timesheets but it was Harris (#58 Bushranger Falcon) who prevailed in the end by just over 0.1s.

While the majority of the field set their respective fastest laps during the first half of the 20-minute session, Mason Barbera elevated himself to third with a later effort.

Craig Woods also qualified on the second row, while New Zealander Matt Spratt lines up alongside Craig Dontas on Row 3. 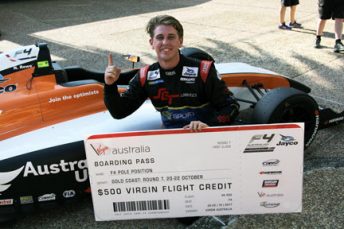 Nick Rowe has secured pole position for Race 1 in a qualifying session highlighted by a spectacular two-wheel moment for Tyler Everingham.

Not one driver had set a lap time before Sage Murdoch ground to a halt and caused a first red flag.

The field only had time for two laps each when two separate incidents brought about another stoppage.

Jordan Mazzaroli spun and backed into the wall at the Gold Coast Highway Chicane.

Around the same time, Everingham drove over a kerb at the Beach Chicane and nearly backflipped, before parking further up the track.

Liam Lawson and then Simon Fallon laid down the challenge to Rowe afterwards but the championship leader finished fastest.

Fallon will join the West Australian on the front row, with Aaron Love and Lawson off Row 2.