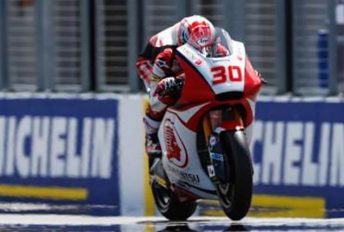 Nakagami set a blistering time early in the second practice session, turning in a number of laps within touching distance of his best of 1:33.310s.

It followed on from his own fastest lap in the morning session, however the day was punctuated by more than a dozen crashes, with 10 in the afternoon session alone.

It was enough to draw the red flag for track conditions mid-way through Free Practice 2 when Tarran Mackenzie’s Suter shed its fairing after he’d crashed at Siberia.

Mackenzie crashed again later in the session at Lukey Heights, this time rejoining without drawing the session to a halt.

A highspeed crash at Turn 1 for Lorenzo Baldassarri saw the Italian lucky to emerge unscathed, the same true for Luca Marini whose bike was destroyed after he fell at the Hayshed.

It was Marini’s second fall of the day, having also come to grief in the opening practice session.

The Hayshed proved a hot spot in the afternoon’s session, with Xavier Simeon and Jorge Navarro coming unstuck at the fast right-hander.

Also among the fallers was Australian Remy Gardner, who lost the Tech 3 over Lukey Heights, wrestling it to the bottom of MG before jumping clear.

At the top of proceedings, Nakagami went quickest ahead of Dominique Aegerter in both practice sessions, whose best effort of 1:33.986s was set in the morning’s session.

Final practice for Moto2 takes place tomorrow morning at 11:55 AEDT before qualifying later in the day.