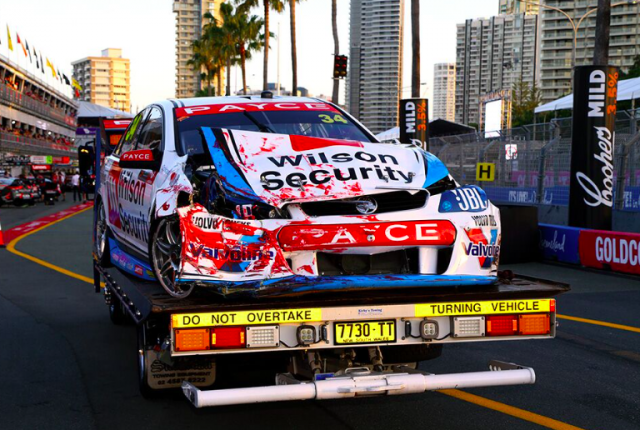 James Moffat says it will be ‘touch and go’ if his damaged Garry Rogers Motorsport Commodore will be repaired in time for Saturday’s qualifying session at the Vodafone Gold Coast 600.

The Melbourne squad is frantically working to fix the #34 chassis following a crash during final practice at Surfers Paradise.

Moffat clipped the inside wall at Turn 11 which resulted in a heavy front on impact with the tyre barrier on the exit of the corner.

The crash has bent the front chassis rails with the damage worse than first feared, forcing the team to work long into the night on a repair.

A dejected Moffat is hopeful the car can be repaired overnight to return to action for tomorrow’s qualifying session at 1120 local time.

GRM had built up Richard Muscat’s Dunlop Super2 Series car for this weekend due to damage sustained on the #34 chassis at Bathurst.

“The team know what they are doing and this point it is sort of touch and go if we can get it going again,” Moffat told Speedcafe.com.

“It is a lot worse than perhaps it even looked.

“I know that if it is achievable then they will be able to do it, they are a fantastic bunch of guys that won’t give up on it.

“Clearly if it is fixable then I should be back out tomorrow.

“Both front chassis rails have moved and I’m not sure if it has moved the shock tower. There are a few bars in and around that area that are looking pretty sad.

“We will know until a bit later on in the evening, hopefully it is repairable.”

Moffat says the crash was down to a ‘silly mistake’ on his part.

“I made a mistake. It was pretty stupid really and I’m really disappointed with myself,” he added.

“I have given my guys unnecessary work and I feel really bad.”