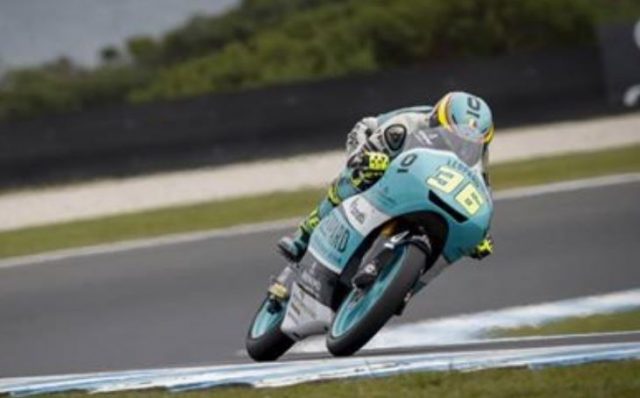 Moto3 championship leader Joan Mir has taken a step closer to the 2017 title after ending the opening day’s running fastest ahead of this weekend’s Australian MotoGP at Phillip Island.

Mir set a 1:37.111s towards the end of the Friday’s running, having dominated the second 40-minute session.

Aron Canet was the only rider in the same league as Mir, but was still more than two tenths away from the pacesetter who was the class of the field.

Mir’s championship rival Romano Fenati struggled, setting his best time of the day late in the afternoon’s session after battling with the front end of his Honda.

He ended the day sixth, having improved from 25th in the opening session which saw him high side at Turn 11.

Australian wildcard Tom Toparis chalked up just handful of laps after mechanical issues kept him in the garage in the morning session.

He then crashed at Lukey Heights in the second session, finishing the day in 31st and slowest of all runners on a 1:42.854s.

Toparis was one of a number of fallers on the opening day, with Philipp Oettl crashing out of first practice after making contact with Darryn Binder’s rear wheel on the approach to the Southern Loop.

Nicolo Bulega also slid out of the opening session, Canet dropping his Honda in an effort to avoid contact as Bulega slid into his path at Turn 4.

The next Moto3 session will see runners on track for Free Practice 3 at 10:00 AEDT tomorrow ahead of qualifying tomorrow afternoon.