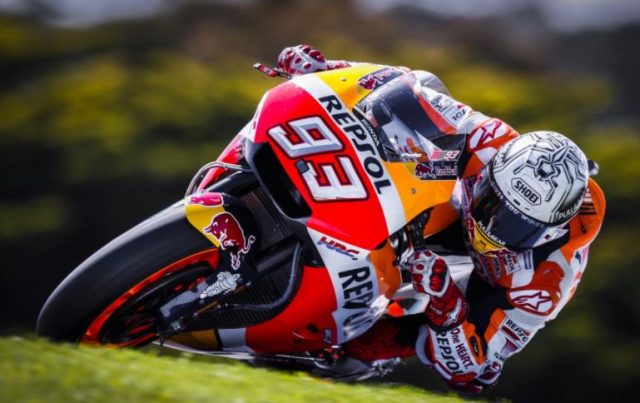 Marc Marquez has ended the opening practice session for this weekend’s Australian MotoGP fastest ahead of Johann Zarco and Jack Miller.

The championship leader set a best of 1m29.602s to head the session by less than a tenth of a second over Zarco, who banked his best as the chequered flag flew to end the 45-minute session.

Zarco’s lap, set with a soft rear tyre, demoted Jack Miller to third place as the Australian made his return following a trail bike injury which kept him out of last weekend’s Japanese MotoGP.

Both Marquez and Miller set their best efforts with a medium rear tyre.

Andrea Dovizioso was fourth fastest, having held the second best time through the middle part of the session.

Suzuki’s Andrea Iannone had initially gone second fastest behind Marquez, who was fast from the moment the pit lane opened, but could do no better than sixth best behind Maverick Vinales in fifth.

Valentino Rossi ended the session 13th fastest, two spots back from Dani Pedrosa, while Aussie Broc Parkes rounded out the 23-rider entry on the Yamaha as he substitutes for Jonas Folger.

Hector Barbera fell early in the session, the Ducati rider running wide as he toured through the Hay Shed before tumbling on the wet grass, ultimately ending the opening session just 18th.

The second MotoGP practice session of the weekend is scheduled for 15:05 this afternoon.