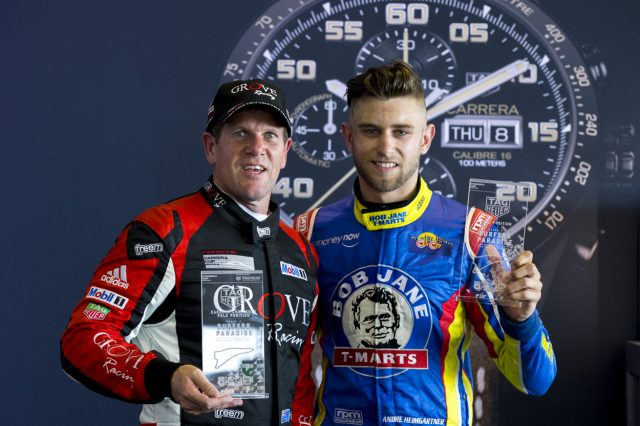 Andre Heimgartner (right) and Stephen Grove with their pole awards

Andre Heimgartner has kept his Carrera Cup championship alive with pole position on the streets of the Gold Coast.

This weekend is the final round of the Porsche series and with championship leader David Wall qualifying in fourth, Heimgartner set a time just over a tenth of a second slower than David Russell’s 2014 qualifying lap record.

Alongside on the front row is Sonic Motor Racing’s Nick McBride with Jaxon Evans set to start third.

In a high-quality session Jaxon Evans was the fastest after the first run ahead of Heimgartner and Wall. Then everyone dived into the pits to bolt-on a second set of Michelin race tyres.

Heimgartner went to the top of the time sheets, before lowering the mark on his 13th and final lap.

Wall can play the points game, but with street racing anything can happen; especially with wet weather predicted at some point over the three races.

In the Tag Heuer Carrera Cup Stephen Grove set the fastest time in the semi-professional category.