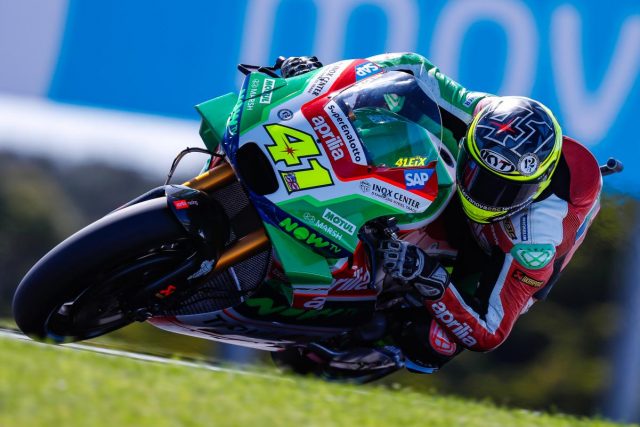 The competitive session saw the top 16 runners covered by a second, while importantly neither Jorge Lorenzo or Valentino Rossi set a lap inside the top ten.

Having set his morning time on medium compound tyres, Marquez spent the first part of the session testing the softer compound rubber before switching to the hard compound in the closing minutes.

Jack Miller was again comfortably inside the top ten, and with conditions expected to turn tomorrow morning could see him automatically progress to Qualifying 2 tomorrow afternoon.

Valentino Rossi was outside of the ten, setting the 12th fastest time with a 1:29.977, one place behind former team-mate Jorge Lorenzo.

Maverick Vinales crashed out at the Hayshed, losing the front end as he changed direction into the sweeping right-hander.

The Yamaha rider escaped unharmed, quickly returning to the paddock and jumping on the spare bike to set his best lap in the dying minutes of the 45-minute session.

Broc Parkes found the scenery as he accelerated out of MG corner midway through the session, while Tito Rabat and Alvaro Bautista also had incidents.

It saw the trio towards the bottom of the timing screens, Parkes in 23rd almost three seconds off Espargaro’s best, one place behind Bautista with Rabat in 19th.