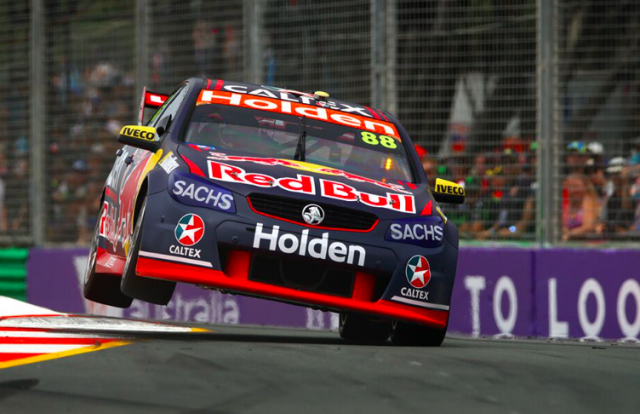 The #88 Red Bull Holden proved the benchmark for the 30 minute session on the streets of Surfers Paradise.

Dumbrell set the pace from the outset before going on to improve to 1:11.14s, which was less than a tenth slower than the time Chaz Mostert set to top opening practice.

“(I) didn’t have the cleanest run in the first session, we were quite high on fuel and didn’t really have that matched with tyre life.

“We put some reasonable tyres on in that session and the car is feeling pretty good.

“Not sure how relevant it is gonna be if the weather mixes it up a bit.”

Prodrive’s run of strong form continued with Dean Canto in the #5 Falcon fifth, in front of team-mate Steve Owen in the #55 Supercheap Ford.

Matt Campbell survived a scrape with the wall to finish seventh in the #97 Red Bull Holden and Jack Le Brocq put the Carsales Racing Nissan Altima into eighth.

The top 10 was rounded out by James Golding (#33 Garry Rogers Motorsport) and Alex Premat in the #17 Shell Ford.

Premat was among a group of drivers who picked up kerb hops for shortcutting the beachside chicane.

He clocked seven during the session which resulted in lap times being rescinded by the officials.

Meanwhile, Steve Richards was 14th in the TeamVortex Commodore he shares with Craig Lowndes.

The primary drivers will jump back behind the wheel for Practice 3, which is scheduled to start at 1655 local time.