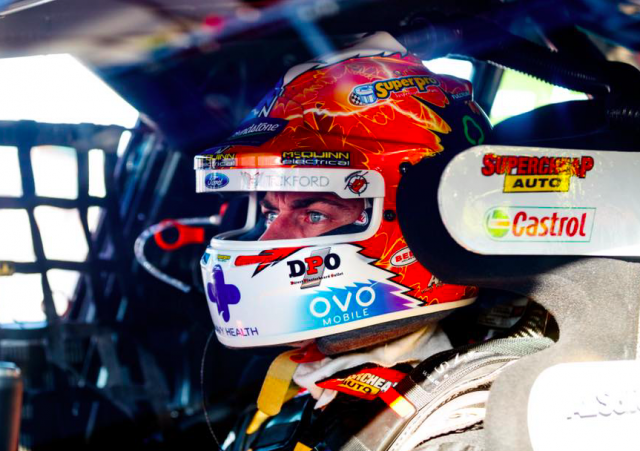 Chaz Mostert believes any of the top five drivers have a genuine shot at the Supercars Championship with the title race “wide open” as the season moves towards the business end.

The Prodrive Racing Australia driver has emerged as a contender lying fourth in the standings heading into this weekend’s Vodafone Gold Coast 600.

After an eventful Supercheap Auto Bathurst 1000, Mostert is now 223 points adrift of championship leader Fabian Coulthard (Shell V-Power Racing), with 900 points to play for over the next three rounds, namely the Gold Coast, Pukekohe and Newcastle.

Mostert has enjoyed a strong second half to the season aided by advances in his Prodrive package on both the chassis and engine front.

The 25-year-old has finished seven of the last eight races inside the top five in a run that features four podiums including a win at Queensland Raceway.

This sequence of top five finishes was brought to an end after coming home 10th at Mount Panorama two weeks ago, alongside co-driver Steve Owen, having been well placed to challenge for victory in the early stages.

While the Ford driver is an outside chance for the title, the recent hiccups for favourites Scott McLaughlin (Shell V-Power Racing) and Jamie Whincup (Red Bull Holden Racing Team) has proved the title race is far from over.

“I think there is a chance for everybody inside that 300 point mark to the leader,” Mostert told Speedcafe.com.

“We saw at Bathurst how quickly things can go wrong for people. It (the title battle) is going to be good and it is what the fans pay the money for. They want to see multiple guys have a crack at the title.

“When you add Newcastle into the mix it is going to be wide open.

“It is that ultra competitive at the moment that it is seriously anyones.

“We will just see how we go.

“For us we have just got to keep the consistency going and if worst comes to worst and it doesn’t end up being our year, then we would have built a good foundation for next year.”

Mostert admits this week’s Gold Coast 600 has proved a difficult event to master in the past, having failed to score a top five result in his six starts at the venue.

The Prodrive Ford struggled at the circuit last year but the Gold Coast-based driver is hopeful a recent raft of upgrades will bring the car into contention this weekend.

“The Gold Coast has probably been one of our toughest and most challenging circuits in previous years and I don’t even remember a time I have qualified in the top 10. We have always struggled,” he added.

“But the way the car has been feeling this year and with the gains we have been working on, I hope we can have a bit more of a competitive run there.”

The Vodafone Gold Coast 600 begins on Friday with opening practice at 1055 local time.