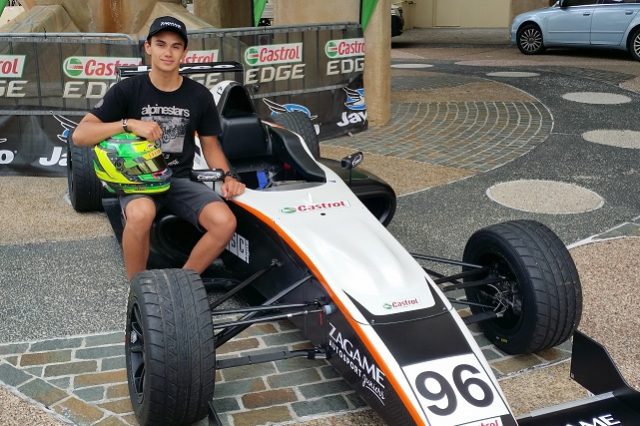 Luis Leeds will make a one-off return to the Australian Formula 4 Championship for its final round of the season at this weekend’s Vodafone Gold Coast 600.

Leeds, who finished sixth in the 2015 CAMS Jayco Australian Formula 4 Championship in 2015 and won a race in a cameo at Sydney Motorsport Park last year, will drive a Castrol-backed Zagame Motorsport entry around the streets of Surfers Paradise.

“(I’m) very fortunate having (General Manager) Cameron McConville and Zagame help me out and get me on-track this weekend,” Leeds told Speedcafe.com.

“I’m really stoked to get out here; I get to put all the experience I have already from Europe, New Zealand, and England onto track this weekend.”

Leeds has been plying his trade in the highly competitive Formula Renault Eurocup in 2017, having finished third in the British Formula 4 Championship as a Red Bull Junior the year prior.

He is currently 17th in the Renault junior series with two top 10 race finishes.

“It’s definitely been the toughest challenge I’ve faced in my career so far,” said the 17-year-old.

“Everything is much more ruthless over there; they don’t lie when they tell you it’s tough, so I have had a very different year to what I’m used to.

“I haven’t finished on the podium once this year yet, but every weekend we’re working towards it.

“I’m doing my best, it’s brought the best out of me as a person but as a driver also, so I hope to go back there for the last race of the season and get a good result.

“I’ve been working extremely hard all year trying to learn and get good results and I hope I can do well next weekend in Barcelona.”

Leeds hopes that the 10th and final round of the season in Barcelona next weekend (October 27-29) will not be his last in Formula Renault Eurocup.

The Melburnian says that he needs to use the experience of his rookie season in the category as a springboard to a much stronger showing in 2018.

“We don’t want to just give up on Formula Renault after the one bad year; that’s not the kind of character my Dad (Dean) and myself are.

“We want to keep persisting with it, and we’ve just got to show that Aussie grit.

“I wish the bank account had that Aussie grit too but that’s not how it works.

“We’re definitely aiming to do another year in Renault and get a really good result, we need that.”