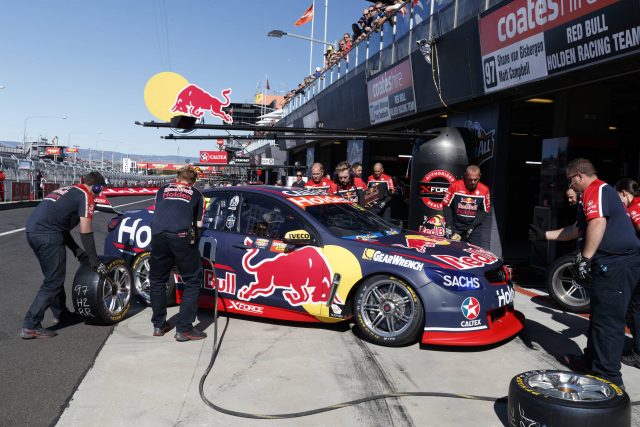 The championship has elected to withdraw AP Racing brake discs from use during qualifying and races on the Gold Coast after reports of cracking at the Supercheap Auto Bathurst 1000.

Issues with the discs, introduced at Sydney Motorsport Park, during The Great Race has forced Supercars to mandate a previous specification rotor for use this weekend and at the Coates Hire Newcastle 500.

Cracking issues at Bathurst resulted in several teams switching break pad supplier from PFC to Project Mu as the former was understood to have contributed to the cracking.

Triple Eight were among the teams to change pads which resulted in Jamie Whincup and Craig Lowndes encountering issues adapting to the Project Mu brand.

This weekend will see the team revert to the PFC pads but Dutton says teams must remain diligent as AP Racing chose to develop a new brake disc due to cracking issues with the part that is now back in use.

“This is not a solution but a band-aid and good one which was needed,” Dutton told Speedcfae.com.

“The story doesn’t stop there with work ongoing between Supercars and AP Racing.

“We still have to be diligent and you can never take it for granted.

“The whole reason they went to a new brake disc because there was issue on the old one. It is not like they are issue free.

“We will still monitor everything because we have seen cracking on the old one but that was classic cracking and you could attribute that to mistreatment and things like that.”

Dutton did however admit that the move back to the previous disc and pad combination will be a boost for Whincup and Lowndes this weekend.

“It is a boost. They are happy and like anything they will try to maximise what they have,” added Dutton.

“It is good on that side but it gives renewed confidence that they are not going to fail.

“It is not just the ultimate performance, it is that they work and don’t fail.

“As a driver at any track let alone Bathurst or the Gold Coast with all the walls, you want to have confidence in the product.”

After a rough Bathurst by the team’s very high standards, Dutton expects his squad to return to form on the Surfers Paradise streets.

Triple Eight has won four of the last eight races at the venue.

“We have got a pretty good track record the so we are always optimistic, and have faith and confidence,” he said.