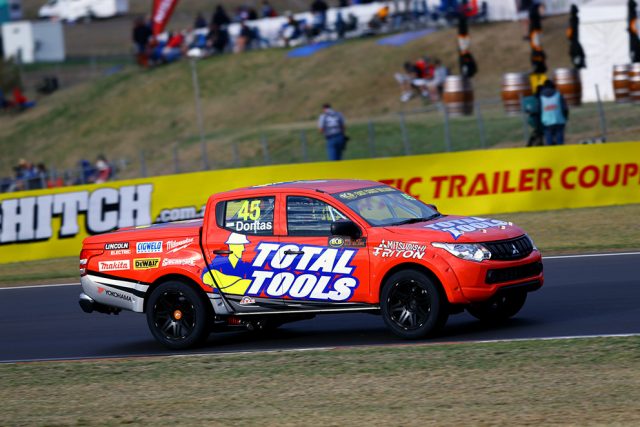 Luke Sieders has confirmed that the Sieders Racing Team will field at least four and up to six SuperUtes for next year’s inaugural season.

As previously reported, Craig Dontas will campaign one of the Tritons, which has been used for homologation and demonstration purposes in recent months.

David Sieders, who had initially been earmarked for the second Triton, has not yet been locked in to the ride, though Luke Sieders is adamant that the car will be on the grid in 2018.

“Craig is definitely running one of the cars, one of the Mitsubishis,” Luke Sieders told Speedcafe.com.

“That’s not finalised yet but we’ll work on it and we’re working on trying to put it together to make it all happen so we’ve got six cars confirmed for the full year next year.”

The team is also trying to arrange a drive for its impressive rookie Mick Sieders, and has received a number of enquiries from other prospective competitors.

However, the presence of the additional cars is dependent on arranging funding for builds.

“There have been a few enquires with guys that have got budgets to run but not budgets to build and run,” Luke Sieders explained.

“We’re just looking at whether we can come together with a budget to do the build process and get these guys across the line.

“There are a few other factors involved with that but it’s just a case of putting it all together at the moment and getting some stuff locked away.”

Craig Woods will race one of the WSM Hiluxes while Ben Walsh, who has driven with the team in Aussie Racing Cars, is believed to be in the frame for the other Toyota.

Previous plans for Ben Dunn to race a Sieders-prepared Ford Ranger have been pushed back to at least the second half of next year due to business commitments for the former V8 Utes race winner.

Luke Sieders also advised Speedcafe.com that engine development is the priority for the Triton at present, with the chassis “pretty close” to a desired outcome.

The Triton is one of six models due to be homologated, with five already accounted for by at least one competitor.

Ross Stone Racing will represent the Ford Ranger, Ryal Harris will race a BT-50 out of Peters Motorsport, and former V8 Utes driver Steve Wilson is building his own Isuzu D-Max.

Despite Holden throwing its support behind the category, its Colorado has not yet been officially spoken for by a team or driver, though Speedcafe.com understands that there is interest in the car.

The V8 Ute Racing Series holds its penultimate round in history at this weekend’s Vodafone Gold Coast 600.