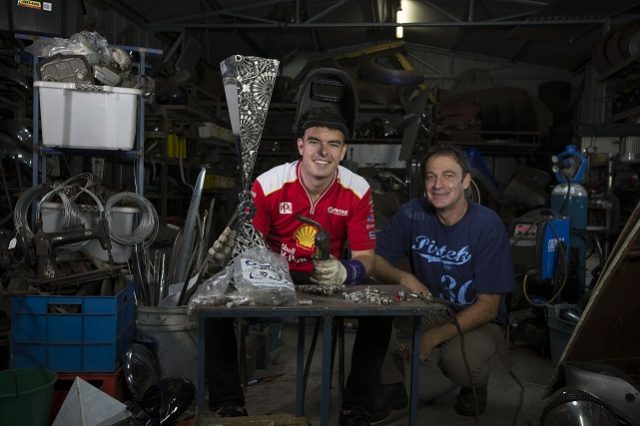 The fifth season of the Pirtek Enduro Cup will be decided at this weekend’s Vodafone Gold Coast 600, with Fabian Coulthard and Tony D’Alberto in the box seat.

The Shell V-Power Racing pair lead the Enduro Cup by 66 points after results of fifth at the Wilson Security Sandown 500 and third at the Supercheap Auto Bathurst 1000.

Of the holders, Shane van Gisbergen is eighth and Alexandre Premat is 13th.

Premat won the 2016 Enduro Cup with Triple Eight Race Engineering but switched to DJR Team Penske to co-drive for Scott McLaughlin in this year’s edition.

McLaughlin paid a visit to Queensland artist James Corbett, who designed and created the perpetual Pirtek Enduro Cup itself, to work on the build of the three-quarter size replica which will be given to this year’s winners.

While McLaughlin is still in the hunt to win the Virgin Australia Supercars Championship, he will be hoping for team-mates Coulthard/D’Alberto to take out the Enduro Cup after a DNF at Bathurst.

“It has been a while since I have done any welding, so hopefully it all holds together,” said McLaughlin, who is a qualified fabricator by trade.

“Unfortunately, I am out of the hunt for the Pirtek Enduro Cup this year, but the Shell V-Power Racing Team still have a great chance to collect the trophy with Fabian and Tony.

“I need some good results this weekend to stay in the championship hunt so that will be all the motivation I need, but I look forward to having a chance of walking away with this trophy next year.

“Who wouldn’t want it in their collection? Have a look at it.”

Corbett’s work on the Pirtek Enduro Cup, which features more than 120 individual Pirtek components and fittings, is a slight departure from his usual work fashioning old car parts into works of art, but one of which he is proud.

“It really has been a pleasure to work with Pirtek on this project over a few years now,” said Corbett.

“The majority of my pieces are made from old car parts and this project really provides a unique challenge each year as we prepare the ‘keeper’ for the winning team.

“It is quite amazing how many people know about the trophy and what it now stands for.

“We had a goal of making it an iconic Australian sporting trophy and I think it has probably become that ahead of time.” 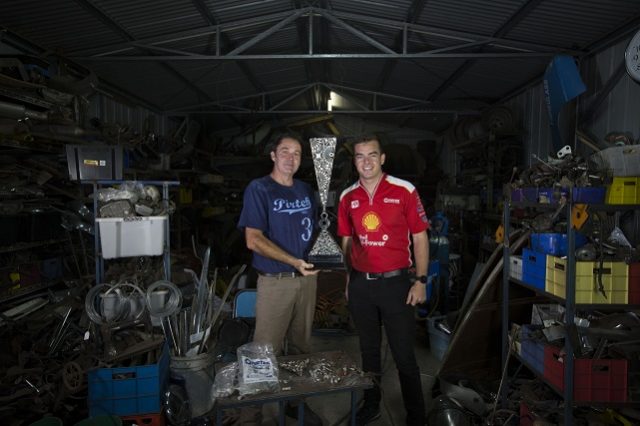