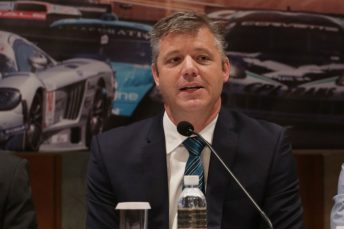 Warburton announced his exit from Supercars on Monday after a four and half year tenure.

His new role will see the former Network Ten boss return to the media industry to head up the APN Outdoor Group outdoor advertising company in Australia and New Zealand.

It has been reported by adnews.com.au that his base salary will be $1 million per annum.

“I am extremely excited to be back in the media industry, a sector I am passionate about,” said Warburton.

“APN Outdoor has a strong reputation for innovation in the out-of-home industry, demonstrated by its leadership position in digital roadside billboards in Australia and its leadership in New Zealand via the strategic use of data to enhance the value proposition of out-of-home for advertisers.

“I look forward to working with the board, management and staff at APN Outdoor to grow the business, to continue to build on its leading market position, and to provide innovative solutions to support both advertisers and the overall out of home industry.”

Warburton will remain in charge at Supercars until December 22, before taking up his new position in January 2018.