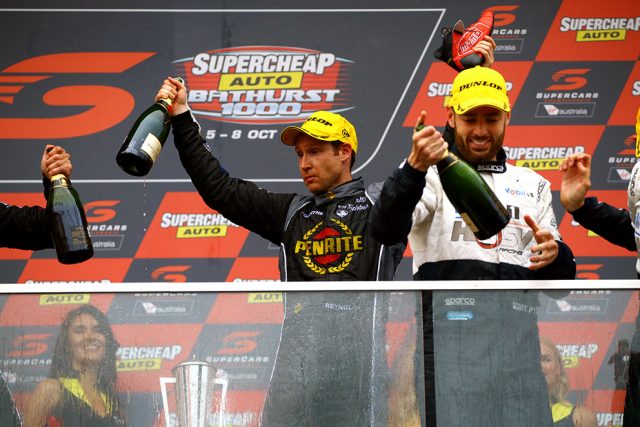 David Reynolds on the podium at Bathurst

David Reynolds has declared that he and Erebus Motorsport are eyeing off a championship tilt in “a couple of years” after their upset Supercheap Auto Bathurst 1000 win.

Reflecting on that triumph in the latest instalment of Speedcafe.com’s Up Front With Foges, Reynolds likened the underdog outfit’s rise to the Disney tale of the Mighty Ducks before declaring that they are capable of challenging Supercars’ leading operations on a regular basis.

“Absolutely, that’s our goal, that is certainly our goal,” Reynolds told Mark Fogarty when asked if he and Erebus could do more damage by beating the big teams.

“In a couple of years, or next year or the year after, we want to try and run for a contender in the championship.

The 32-year-old joined Erebus at the beginning of its transformation from an expensive yet poorly performing Mercedes team to a lean customer Holden operation.

His tenure has coincided with the Betty Klimenko-owned operation’s new era based in Melbourne, after vacating the former Stone Brothers Racing premises on the Gold Coast, and came following his axing from Prodrive Racing Australia.

Reynolds paid tribute to how the small crew has built itself into a respectable outfit, saving particular praise for his engineer Alistair McVean.

McVean was similarly dropped by his last team, Walkinshaw Racing, and joined Erebus just prior to last year’s Bathurst 1000.

“It was like I’d worked my whole career to get to the front of pit lane with a really good team at Prodrive and then I kind of just had to start all the way back at square one again,” reflected Reynolds, who finished third in the championship in his final year at PRA.

“But in knowing that, we tried to do everything we possibly can to build ourselves to get better and better and I think we’ve built a really, really solid crew around us and I can’t thank them enough.

“They try so hard and they put in so many hours and Al McVean is probably the smartest person I’ve worked with ever, and without his input and expertise I can’t do my job.

“But definitely, it was a risk at the start (to join Erebus), and most people said that would probably be the end of me.”

CLICK HERE for more from David Reynolds in the latest Up Front With Foges.