Carrera Cup titles to be decided on Gold Coast

Carrera Cup titles to be decided on Gold Coast 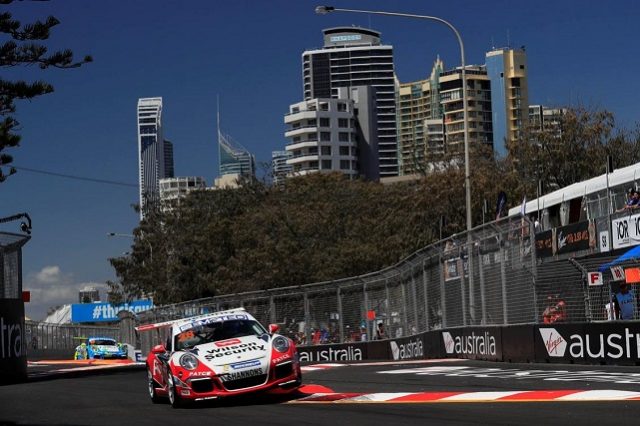 David Wall leads a three-driver contest for the Porsche Carrera Cup Australia outright title which will be decided on the streets of Surfers Paradise this weekend.

A total of 180 points are available on the Gold Coast, 60 for each race win.

Wall has been a model of consistency this year having not yet finished a race outside the top six.

“I’m feeling good and I think it’s a testament to everyone at Wall Racing that we’re in the hunt,” said Wall.

“I’m very chuffed to be there. Everyone has put in the hard yards since a strong showing at the end of last year and I’m proud of that and looking forward to getting stuck into it.

“We’ve put everything we can into making the car as good as possible and I’m ready personally, too.”

Heimgartner, like Wall, is seeking to win the all-Porsche championship for the first time.

The New Zealander has been the only other man to sit atop the points table this year, having won two races and the round at Adelaide and then again at Bathurst.

“After leading the championship early and now chasing David Wall, this title has been something I have been working towards all year long and with the final round hitting the track this weekend, I am going to be throwing everything I can at it,” said Heimgartner.

He will also reprise his role as Ash Walsh’s injury replacement at Brad Jones Racing, having combined with Tim Slade to finish ninth in the Supercheap Auto Bathurst 1000.

“After the results at Bathurst, I am feeling confident of a strong result this weekend, but as we know, anything can happen on the streets of the Gold Coast,” he added.

While 2004 Carrera Cup champion Davison is an outside chance of repeating in 2017, he leads the category’s inaugural Endurance Cup after a win in the longer race at Sandown and second-place at Bathurst.

That honour will be settled during Sunday morning’s Race 2 of the weekend, which is scheduled for 28 laps, more than double the 12-lap distances of Races 1 and 3.

While Stephen Grove sealed the TAG Heuer Carrera Challenge title at Bathurst, the gentlemen drivers’ Endurance Cup battle is wide open due to leader Tim Miles’ absence as a result of business commitments.

Marc Cini is best-placed to benefit, sitting second in the Carrera Challenge Endurance Cup standings ahead of Graham Williams and Grove.