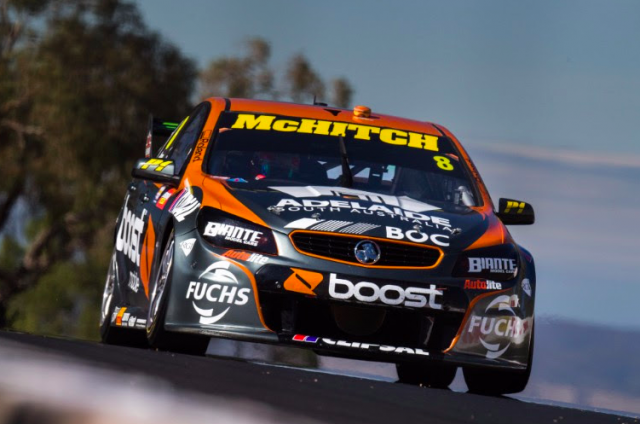 Nick Percat and Macauley Jones will continue to run under the colours of Boost Mobile for this weekend’s Vodafone Gold Coast 600.

The #8 Brad Jones Racing Commodore adopted a new eye catching silver and orange colour scheme at the Supercheap Auto Bathurst 1000, which will remain for the final round of the Pirtek Enduro Cup.

After a disappointing end to his Bathurst campaign, Percat is hoping the Gold Coast can provide a positive end to his Pirtek Enduro Cup campaign.

The South Australian led The Great Race on lap 156 before a mistake at The Chase. His race ultimately came to an end following a crash on the final lap.

“It was a clever idea to have the two similar liveries at Bathurst, as it kept the Supercars fans on their toes as they’d do a double take to see if it was #8 or #22,” said Percat.

“Luckily that didn’t happen with our pitstop crews.

“It was a tough day at Bathurst, getting so close to the finish.

“Macauley did a great job, the team made good strategy calls and the car was pretty speedy in the wet conditions.

“It was unfortunate the steering went after getting knocked around towards the end of the race.

“Getting a surfboard at the Gold Coast 600 would be an awesome way for Macauley and I to finish our Pirtek Enduro Cup campaign.”