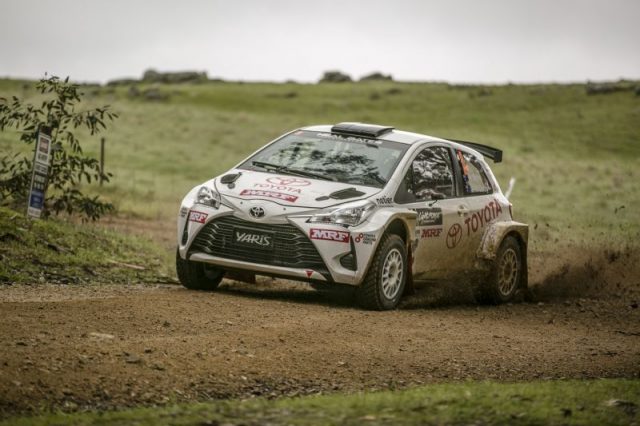 Harry Bates will give up any chance of winning the Australian Rally Championship when he switches tyre suppliers for Rally Australia.

Bates will test himself against the World Rally Championship field by running the popular Michelin tyres on the Coffs Coast, instead of the MRF tyres which are the standard for the local championship.

The decision means that the Toyota driver will be unable to score ARC points in the event, which serves as the final round of both championships.

However, Bates already faced a hard ask to win the title after a disastrous debut for his brand new AP4-spec Yaris at Rally South Australia when he complete only one stage due to mechanical issues.

The previous championship leader dropped to a distant third in the points as a result.

“Ever since the end of 2016, when we came painfully close to winning the Australian Rally Championship, we have worked harder than ever before to put ourselves in a position to achieve what we couldn’t last year,” explained Bates on social media.

“Unfortunately, despite our speed and consistency, the numbers are against us to make the dream win happen this season due to some technical issues, particularly at the most recent round.

“This is a part of Motorsport – we know that.

“As a team, we’ve made the decision to withdraw from the ARC title race, and we are putting all of our efforts in to nabbing a strong result in the WRC at Rally Australia next month.

“Not an easy decision, but this gives us the opportunity to compete using the same tyre as the international teams, and I can’t wait to see what the Toyota Yaris AP4 can do on the awesome roads around Coffs Harbour.

“Thank you to Toyota Australia and (sponsor) Netier for their support of this decision.”

The move is a sign of Bates’ overseas ambitions given that he will be competing in the shop window of a world championship round.

During the 2017 Rally Australia launch in late August, Bates made clear his desire to compete in Europe in the near future.

“Absolutely, I’d love to be competing in Europe on a part-time basis as soon as I can,” he said at the time.

“I have been really happy with what I have been able to achieve here and I want to continue that.

“Certainly Europe is on my radar but it is all about securing the funding and getting over there and giving myself the best opportunity to do well.”