World champ backs up in Race of Stars 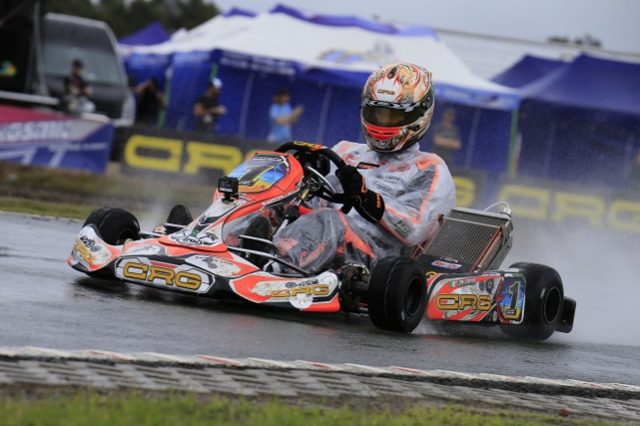 Back-to-back karting world champion Paolo de Conto has now achieved the same in the weekend’s Race of Stars on the Gold Coast.

De Conto (CRG Australia) won both Heats 3 and 4 on the Sunday morning in KZ2, adding to his Heat 1 victory of the day before.

Lehane finished runner-up overall, becoming the inaugural recipient of the Jim Morton Trophy as highest-placed Australian in KZ2, with Belgian Dreezen rounding out the podium.

KA2 also went to a points decision due to a washed-out final, with Heat 3 winner Lachlan Hughes taking overall honours.

James Sera showed all the quality that has made him a five-time Australian champion by winning KA3 Senior by nearly 10 seconds.

Christian Pancione prevailed in a much more hotly contested battle for the minor placings to take second in the 15-year-old Victorian’s first Senior class race, ahead of Newcastle’s Thomas Davies.

Hoey won KA3 Junior having led for much of the final, with Hughes and Jackson Souslin-Harlow also on the podium.

Zac Crichton was classified as the KA4 Junior winner despite finishing second to Declan Matthews in a race-long battle.

Matthews was hit with a post-race penalty that put him back to fifth, elevating Blake Purdie and Ryan Newton to the podium.

The TaG 125 final was subject to the worst conditions of any race, with Brendan Nelson edging Kris Walton in an encounter that was called early due to the weather.

The top two finished four seconds ahead of Flynn Jackes.

Marcos Flack beat Adrian Haak in what was a private battle at the front of the Cadet 12 field, with Hugo Simpson a distant third.

Next Story VIDEO: Karters come to blows in Brazil