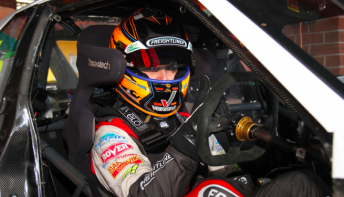 Slade’s lap proved half a second better than Barton Mawer could manage in a Porsche 968, the pair having battled for the top time throughout the event.

Mawer’s tilt came to an abrupt end when a driveshaft failed, preventing him from turning another lap.

Rob Nguyen took out the Pro-Am class in his Honda Civic, dominating over Canadian William Au-Yeung in another Civic with a 1:26.2760s.

Third in class was the Finnish entry of Sami Sivonen aboard an Audi R8, who had held second before losing out to Au-Yeung to make for three different nationalities on the Pro-Am podium.

In the Open Class, 2016 winner Nathan Morcom duked it out with Adam Casmiri, with the latter taking the honours with a solid 1:27.562s lap on Saturday.

Casmiri had led the class on Friday night before Morcom struck back, though the Super2 racer couldn’t match the pace from the Honda Civic.

Rounding out the field in Clubsprint was Improved Production racer Jordan Cox, who pedalled a Mitsubishi Evo 9 to class honours.

Despite setting the best time on Friday, Cox claimed to have struggled with fuel issues before banking a 1:36.839 to win the class by 2.5s over Ben Tran’s Honda S2000.

At the top end of the lap sprint table, Slade’s 1:20.971 puts it in the ballpark of the fastest official lap ever recorded around Sydney Motorsport Park, a marker which stands at 1:19.142, set by Nico Hulkenberg in an A1GP car in 2007.