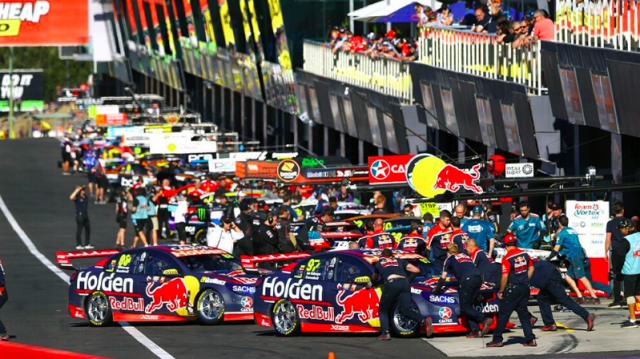 Supercars team owners have expressed their disappointment at the news James Warburton will leave his role as CEO at the end of year.

Warburton’s departure was announced this morning with the former Network Ten boss set to leave his role of four and half years at the end of 2017.

The decision has been met with disappointment from teams contacted by Speedcafe.com.

Warburton took over the running of the sport in difficult circumstances during mid-2013 but has left the sport in a better shape, according to a selection of operation owners.

During his tenure he managed to strike a $241 million dollar television deal between Fox Sports and Network Ten, which was divisive among fans, but crucial for the viability of teams.

He also helped introduce the Gen2 regulations and has continued to pursue new horizons for the championship in Asia.

Brad Jones, who holds a position on the Supercars board, says Warburton played a huge role in turning the sport around.

“I think he has been a huge part of turning the business around,” Jones told Speedcafe.com.

“We have gone back to the point of where the business is viable for teams and he has been a real important part of that.

“I think that TV deal was the first big step really. We ended up with a TV deal that got us back heading in the right direction and enabled the income and viability to be right for the teams.

“It would be fair to say that I’m really sorry to see him go and extremely disappointed that he is leaving.

“He looked after teams and has the best interest of the sport at heart.”

The view is echoed by Barry Rogers at Garry Rogers Motorsport, who was not expecting the news this morning.

“I think the sport is in a lot better shape than it was when he took over in mid-2013,” Rogers told Speedcafe.com.

“His enthusiasm and approachability from a team point of view is something we will miss.

“I thought he was doing a very good job and we are disappointed to see him go.

“I think he has been a good leader for our sport and he represents well and deals with the governments well.

“Who knows what will happen from here?”

Charlie Schwerkolt, boss of one-car operation Preston Hire Racing, told Speedcafe.com that he was devastated by the announcement.

“I really feel the sport is just starting to get somewhere so he is going to be deeply missed for sure.

“We have a current TV deal until 2020 and I don’t think there could have been anyone better to negotiate that.

“His knowledge of the whole industry is incredible. I think we were in good safe hands, he was good with the governments, all the team owners and he was our leader.

“I’m not happy at all by the sudden departure.”

Walkinshaw Racing owner Ryan Walkinshaw believes the sport would be dead had Warburton not brokered the current pay television package.

“Whilst I know many fans blame Warburton for the paytv deal, without that the teams would be broke and the sport dead. He saved us,” said Walkinshaw on social media.

“I’ve huge respect for James Warburton and the sport will be a worse place without him at the helm. He’s been a great CEO and will be missed.”

Warburton will remain in charge for the balance of the season with his last day set to be December 22.