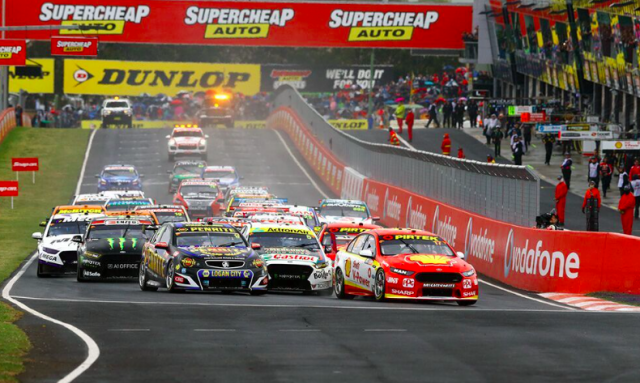 Supercars CEO James Warburton expects the current free-to-air television deal with Network Ten to remain in place until 2020 amid the station’s takeover by CBS.

The championship is reaching the halfway mark of its six-year multi-million dollar television deal between Fox Sports and Network Ten, which began in 2015.

However, free-to-air motorsport coverage on Network Ten has been slashed in recent weeks with the immediate loss of Formula 1 rights as the troubled station restructures, after being placed into administration earlier this year.

Only the Australian Grand Prix will be shown live on the channel next season, which is set to be taken over by American media giant CBS.

Responding to the announcement, Warburton, a former boss at Network Ten, has confirmed to Speedcafe.com that Supercars’ current free-to-air deal is expected to remain unchanged, having already spoken to CBS executives.

Broadcast rights are shared between Fox Sports and Network 10 with every session of the season shown live by the pay television broadcaster, and from next season each race will be ad-break free.

“There is no change through to 2020,” Warburton told Speedcafe.com.

“We’ve been in contact with CBS executives, who of course I knew from the days when I was at Network 10.

“They are absolutely delighted and they have a strong interest in motorsport and they see us (Supercars) as a key pillar.

“It is the same structure nothing changes.

“It is effectively no change even though it is in some ways as there were other contracts that were not pursued or terminated under the new ownership.

“They (CBS) still don’t have control yet and I think there is still a few more weeks to go on that, there are a few things that need to happen before CBS has full control.”

Warburton says he wasn’t surprised to learn of F1’s free-to-air coverage being slashed due to the current viewing climate.

“When you look at the status of free-to-air in this country, the networks are losing under 30 audiences by about 15 percent a year,” he added.

“We are in a different world and some things are inevitable.”

The Confederation of Australian Motorsport (CAMS) has meanwhile described the decrease in F1 coverage in Australia as ‘far from ideal’.

“As the administrator of the sport in Australia, the more motorsport on free-to-air television, the better,” CAMS CEO Eugene Arocca told Speedcafe.com.

“It is less than ideal when we have an Australian competing on an international scene in a major sport and we only get to see it on free-to-air television live once a year.

“We can’t control those rights and how they are sold but it is far from ideal.”