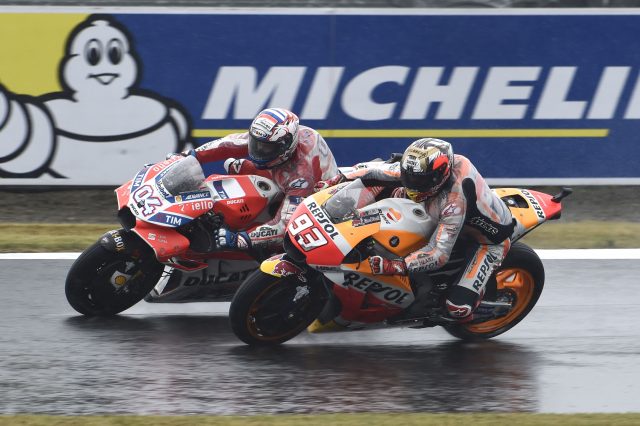 Marc Marquez has apologised to Andrea Dovizioso for an aggressive pass during a thrilling battle for victory in MotoGP’s Japanese Grand Prix.

The elbow-to-elbow racing started when Dovizioso made his first attack on lap 19, grabbing the lead at Turn 5, and the pair traded positions twice a few laps later.

That battle with three laps remaining included a bold pass from Marquez at Turn 3, where a late lunge made Dovizioso take avoiding action.

Though Marquez said he enjoyed the battle, he apologised to Dovizioso in the post-race press conference for that pass.

He said: “I want to say sorry, Turn 3 was a little bit… (laughter between Marquez and Dovizioso).

“Turn 3 was the limit because I braked very far behind him.

“I went inside and that was on the limit, but the rest of the battle was very nice, I enjoyed it a lot.”

After losing the lead to Marquez, Dovizioso made his own bold move stick at Turn 6, was then passed again by the Spaniard, before hitting back on the final lap.

When Marquez was almost unseated by a big wobble at Turn 8, the Ducati rider closed in and passed him under braking at the Turn 11 hairpin before withstanding a last-corner lunge.

Marquez revealed he could feel his bike “shaking” before that final-lap error, and said the ending reminded him of his failed final-turn move in Austria.

“I was pushing, took risks on a few laps,” said Marquez.

“The mistake at Turn 8, this I already started to feel, like my bike was shaking.

“He overtook me at Turn 11 because he was strong on the brakes.

“We repeat the same situation like Austria, but it was great.”

Marquez said it was proof that any previous talk about him edging towards the title had been premature.

“I am pushing everything, I’m riding really well, I try to take all the potential from my bike.

“I try to give everything, all the points will be important.”