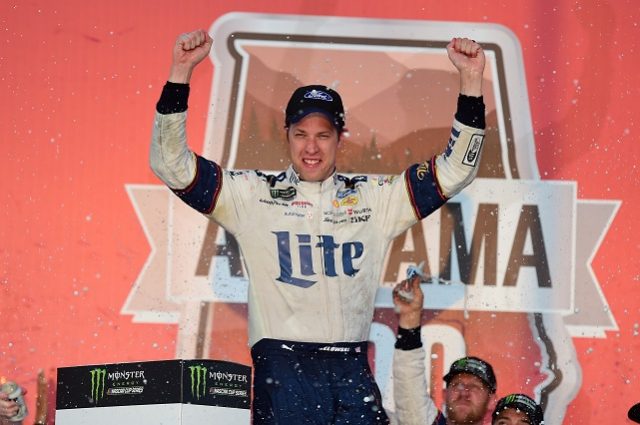 Brad Keselowski has booked his place in the NASCAR Playoffs Round of 8 with a final-lap victory in an Alabama 500 which featured three red flag periods.

Keselowski rounded up Ryan Newman in the final bends to take victory, the first of only four of the 12 Playoff drivers to make the finish.

The #2 Miller Lite Team Penske Ford led for the first time at the end of Stage 1 and again before the final red flag on Lap 184 of 188.

Hamlin got by at the restart but couldn’t hold on as Keselowski took a third win of the season and moved up to second in the standings.

Aside from Keselowski, the Playoff drivers who were able to greet the chequered flag were Denny Hamlin in sixth, Kyle Larson in 13th, and Matt Kenseth in 14th.

Half of the Playoff contenders were caught up in ‘the big one’ which saw the race red-flagged with 17 laps to go and accounted for a total of 16 cars.

David Ragan and championship leader Martin Truex Jr. set off the incident when the latter gave the former a push.

A four-crash crash shortly after the restart ended the races of Stage 2 winner Ryan Blaney and Kevin Harvick, among others.

Chase Elliott went out inside the final half-dozen laps after turning around Daniel Suarez while battling for the lead.

Jamie McMurray dropped to the bottom of the Playoff group having been taken out while trying to make pit road in an early incident.

The Round of 12 concludes with the Hollywood Casino 400 at Kansas Speedway on Monday 23 October (AEDT).

VIDEO: The big one