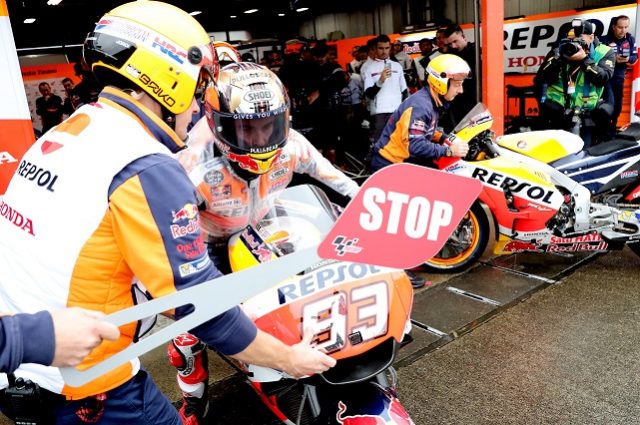 Marc Marquez has defended his choice to effectively sacrifice a pole position as he felt that gathering slick tyre data at Motegi was more important.

Marquez was fastest in three of the four free practice sessions in a wet Japan and burst out of the blocks in Qualifying 2 to go nearly two seconds faster than the rest of the field.

However, with the track not yet obviously dry after earlier rain, the Repsol Honda rider chose to switch to slicks for his second run.

He was overhauled by Johann Zarco and Danilo Petrucci as a result, and very nearly lost a front row start altogether.

Marquez said the switch to slicks was a last-second decision that allowed him to “understand many things”.

“Of course it was too early in the end, but I did a good lap time in the first lap already with the soft (rear wet) tyre,” he said.

“I was thinking to put the extra-soft (rear wet tyre) on to improve the lap time. But when I stop in the box, I take the gamble. I say ‘Okay, I want to try the slick’ because was so close.

“I tried it, I understand many things, interesting things, but in the end I couldn’t have the chance to fight for pole position.

“But for me it was not the most important thing. In the end, the work for the race is important, and the front row was the main target.”

According to Autosport, when asked whether he expected his initial lap time to be good enough for pole, Marquez said, “No, because I knew, and I checked on the other practice sessions, that with the extra-soft they were improving a lot.

“But on the other hand I knew that also was a lap time for be on the first row, or maximum second row.

“Of course I would like to be on pole, honestly, but in the end I see the positive things and I understand things that maybe without trying the slicks I couldn’t understand.”

The only other rider to use slicks in Q2 was Yamaha’s Valentino Rossi.

The Italian toiled over 10 seconds off the pace in his initial run, and could not move up from 12th despite a late switch to wets.

Rossi explained he took a risk with the tyre selection because he expected his Yamaha to struggle for rear grip on a drying track surface in qualifying.

“We try to risk because there was already some dry line, so I want to try to put temperature in the tyres,” he said.

“Unfortunately, it was still too wet, so I needed too much time.”

On whether his tyre gamble could pay dividends in the race, Rossi said: “No, because it was really close to dry but unfortunately not enough.”