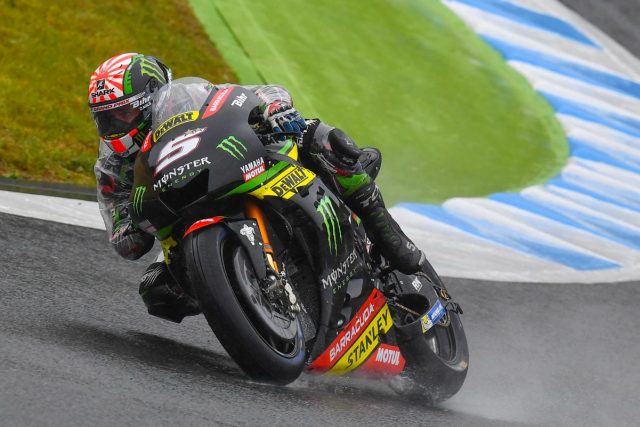 Johann Zarco has qualified on pole for the Japanese Grand Prix after previous fast man Marc Marquez finished the session on slicks on a drying Motegi circuit.

Despite appearing unbeatable at the start of the session, Marquez (Repsol Honda) was very nearly bumped off the front row altogether as Danilo Petrucci (Pramac Ducati) qualified second-fastest.

Zarco was third-fastest after the first runs before moving to the top of the timesheets with a 1:53.469s at the start of his second run, the Tech 3 Yamaha rider earning his second career MotoGP pole.

Marquez had laid down a 1:53.903s on his very first flying lap, nearly 0.7s faster than the previous fastest lap of the weekend which the championship leader had set in Free Practice 4 despite nearly crashing.

While the track did not have an obvious dry line, and while Valentino Rossi (Movistar Yamaha) had started Qualifying 2 on slicks and lapped over 15 seconds off the pace, Marquez opted to do the same for his second run.

With Zarco having since already taken over top spot, Marquez was relegated another position by Petrucci after the chequered flag.

Aleix Espargaro then came within half a tenth of knocking him off the front row, the Gresini Aprilia taking fourth in the end.

He will start alongside Jorge Lorenzo (Ducati Team) and Dani Pedrosa (Repsol Honda).

Both Red Bull KTMs made it through Qualifying 1, with Bradley Smith qualifying seventh and Pol Espargaro eighth.

They will share the third row with factory Ducati rider and championship contender Andrea Dovizioso.

The factory Suzukis of Alex Rins and Andrea Iannone occupy 10th and 11th on the grid, alongside Rossi.

Still recovering from a broken leg, Rossi caused a scare when he crashed in FP4 but was able to remount.

Maverick Viñales, who has been uncompetitive in all practice sessions as rain fell for most of the weekend so far, will start 14th on his Movistar Yamaha.

Cal Crutchlow was the other big name to not progress past Q1.

The LCR Honda rider was on track to be just fast enough to make the top two but cost himself valuable time with a big moment at the Victory Corner on what would have been his fastest lap of the session.

In Moto3, Australian debutant Tom Toparis will start at the very rear of the 31-bike field.