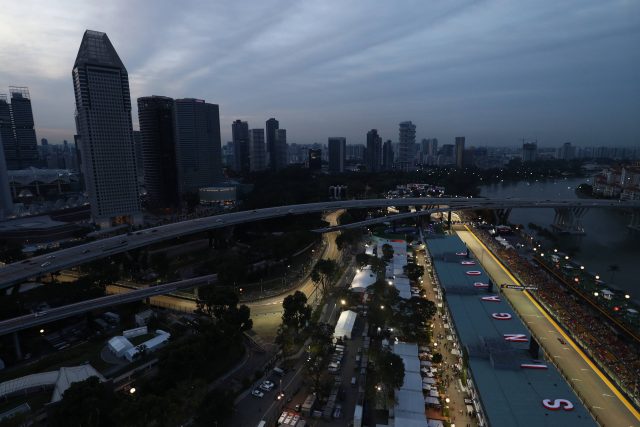 The Singapore Grand Prix could join the Supercars 2019 calendar

Supercars is in serious discussions with Singapore Grand Prix organisers to stage the main supporting races at the glamour Formula 1 night event from 2019.

The visit would count towards the Supercars championship, just like the Australian GP support races from next year.

Speedcafe.com has learned that the Singapore GP is one of three F1 events in addition to Albert Park that Supercars is eligible to run on the undercard as an official support category.

Supercars has targeted 2019 to race at the Singapore GP as the feature daytime attraction before the F1 action under lights.

It would be an initial three-year deal to align with the remainder of Singapore’s renewed F1 agreement through 2021.

According to Warburton, his discussions with Singapore GP bosses, representatives of the island city-state government – which underwrites the nominally privately run event –  and F1 chiefs were positive.

“I met all the key players and got an incredibly good reception,” he told Speedcafe.com.

“There is genuine interest, but there’s no deal done. We were always talking about 2019.

“I think we could actually add a lot to the event. We’ve proposed something, but there are no guarantees.”

Discussions are proceeding and if Supercars secures a deal to race for title points at the Singapore GP from 2019, the final running of the Sandown 500 under the existing agreement would have to be rescheduled because their dates are likely to continue clashing.

Warburton explained that the appeal of adding Supercars to the Singapore GP support race program was the amount of track activity before the mainly after-dark F1 track action.

This year’s supporting categories at Marina Bay were the Ferrari Challenge and Porsche Carrera Cup Asia.

“It’s actually not a motor sport event in terms of the support categories and the track action,” Warburton said.

“It’s an incredible spectacle with major concert acts, so I actually think we could bring back a lot of motor sport fans who have perhaps gone away over the years.

“The music offering (headlined by Ariana Grande and Duran Duran) was extraordinary, held on three different stages across all three days, and that appeared to me to be almost the driver outside of the purists who were there for the F1s.”

Warburton admitted that the multi-million dollar cost of flying the Supercars field to Singapore and back was a stumbling block, along with finding space in the restricted confines of the Marina Bay city street circuit to accommodate the V8 entourage.

“The appetite’s for us to be there is strong, but it’s a big pill for them to swallow,” he said.

“I think there are a couple of unique ways we could do things and now it’s a matter of working out the best approach.

“It’s really down to economic benefit and tourism, so it comes back to working out numbers and actually structuring a deal.

Warburton affirmed that Supercars’ bid to race at the Singapore GP was supported by F1’s new management – as well as leading team bosses.

“We have a great relationship with F1 and there’s no impediment from that perspective,” he said.

“They’re quite encouraging, they’d love to see us in Singapore to actually add to the spectacle.

“I also had the same sort of reaction from the team owners I met.”

Although the V8s’ main appeal is to bolster the afternoon entertainment, Warburton also expressed a strong desire to have the opportunity to race at night at some stage during the three days of the Singapore GP.

“You’d certainly like to run under lights, as opposed to the early afternoon,” he noted.

He also revealed that Supercars’ status as an official F1 support category in the Asia region was clinched at the end of March.

“We concluded that deal with Sean Bratches within a week of the Australian Grand Prix,” he said.

“We’re an official F1 support category and we can support three F1 events outside Australia.

“But other than that agreement, it’s then up to us to strike the deals.”