Based on the N35-GT model, the karts have been fitted with a pair of 10hp Honda engines and are capable of speeds up to 105km/h.

“We’ve got a few members here that have been with us for four years now that have done almost 9500 laps of this track,” Holm told Speedcafe.com.

“We could see them wanting something and it had to be affordable.

“The Ricciardo was a perfect chassis. We ran a twin-engine kart in the SEK (Sportsman Enduro Karting) series and it gave us this idea.

“Because there’s so much torque in these little motors that if you are big, you do get going quite quickly.” The Ricciardo hire kart on track

Michael Patrizi’s Patrizicorse operation is the exclusive Australian importer of the Ricciardo Kart, and confirmed that the Xtreme model is a unique vehicle.

“A lot of circuits in Europe and America are starting to switch to this because the rental kart is too far away from the race kart,” Patrizi told Speedcafe.com.

“We’ve brought something a lot closer and invested a lot of money in getting the product right, to where it is.

“These guys, Xtreme Karting, have done something completely unique.

“Our kart’s made to have two engines on it, the way the chassis is welded and designed; however they’ve gone and put the biggest four-stroke engines you can get on it, rear wing, all the fruit, and it does over 100km/h.”

The karts will be utilised for the Assassin Series, which will be held monthly at the Xtreme facility in Pimpama.

Open to any member of the public over 16 years of age who can demonstrate their competence in a SodiKart, drivers will take five laps to set an average lap time as a target, then aim to achieve an average time over a subsequent 20-lap run which is as close to the target as possible.

Holm says that the series will allow drivers of varying sizes to compete against each other and have a genuine chance of winning the series.

“The Assassin Series is a new hire kart series for everyday punters and they race the clock,” said Holm.

“It’s more of a driver skill test rather than just head down exercise. 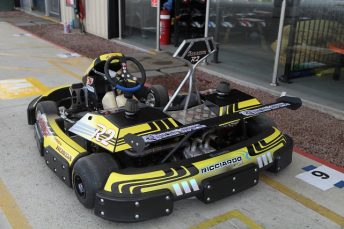 A rear view showing off the twin Honda engines

“If someone weighs 20kg less, no matter what you do, they’ll always be half a second quicker than you, but if you dial in at one minute and they dial in at 59 seconds, and you have to keep as close as normal times, you’re really thinking, ‘Should I be following that bloke? Should I be backing off?’

“It gives everybody the chance to win; you don’t have to be the fastest or lightest.”

The series is set to be held on the third Sunday of each month, with drivers having to complete at least six of the 12 rounds to be eligible for the series trophy.

Meanwhile, Xtreme Karting Complex will this weekend host the annual Race of Stars, featuring some of the world’s very best international drivers.

Practice is underway today, with qualifying and heats tomorrow and finals on Sunday.

Entry is free to the public.