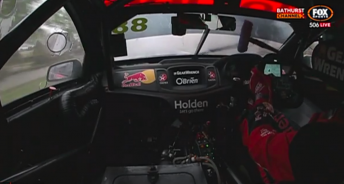 Triple Eight will work on a solution to its visibility issues after the team were forced to use makeshift squeegees to de-mist its windscreens during the Supercheap Auto Bathurst 1000.

Inclement weather coupled with rising temperatures inside the cabin of its cars sparked fogging issues in last Sunday’s wet race, resulting in the team’s drivers using a custom built squeegee to clear the windscreen.

The device, which was fixed to the cockpit using magnets, was approved by Supercars prior to the race, although it did spark a stewards investigation after Mobil 1 HSV Racing claimed the team had breached the rules.

While the sight of its drivers using the squeegee provided entertainment for onlookers, Dutton admits the system was embarrassing and the team is keen to find a swift solution.

“To be honest it is an embarrassing thing that we had to do,” Dutton told Speedcafe.com.

“We did it because we didn’t have full confidence in the car not fogging up.

“It is something that is cool to have a laugh and a bit of ingenuity there, but at the end of the day there were other cars out there with clearer screens than us.

“We were all driving in the same conditions and others were doing a better job than us.

“It takes a lot of effort and energy away from other areas we could be working on and we do have to keep working on it.

“We are aiming to rectify as soon as we can and have a fit and forget solutions as fast as we can.

“Every team is very careful with weight so it is not like you want to build in any road car de-mister options.

“But it is something that if we can’t do the way most teams do with internal window coatings and treatments, then you do have to look at a more complex and weighty solution.

“If you can’t see then you are not going to be able to go fast.”

Triple Eight were not the only team to encounter issues with the Freightliner entry of Brad Jones Racing suffering fogging issues, which ultimately led to a more serious issue for Tim Slade.