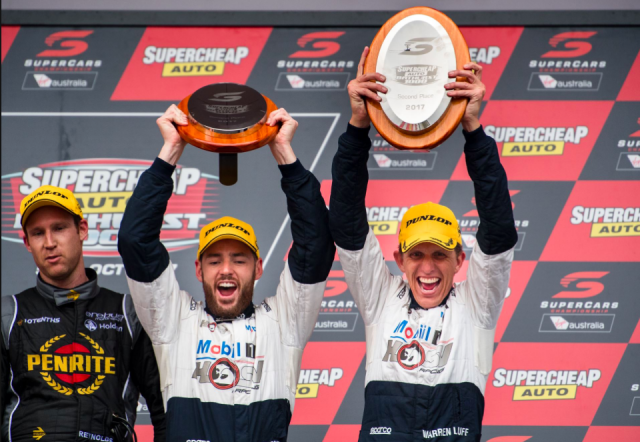 Scott Pye and Warren Luff’s run to second at the Bathurst 1000 represents a timely confidence booster for Mobil 1 HSV Racing as the fallen giant continues to rebuild.

The Clayton squad scored only its second podium of the season when Pye and Luff combined to overcome challenging wet conditions and late Safety Car drama at Mount Panorama.

It proved to be a timely result for the team arriving just days after announcing a partnership with IndyCar powerhouse Andretti Autosport and British Sportscar team United Autosports, to form Walkinshaw Andretti United from 2018.

New co-owner Michael Andretti attended the The Great Race for the announcement, before leaving on Saturday for a pre-organised engagement.

Having endured a troubled campaign that has been plagued by a lack of car speed and a much publicised internal restructure, the podium has provided a much-needed boost to the operation.

“It is confidence-building,” General Manager of Motorsport, Mathew Nilsson told Speedcafe.com of the significance of the result.

“It has been great to have the guys from Andretti here this weekend just to observe and see how we go about it and look, it’s just the result we needed, so hopefully it’s a springboard into the rest of the season, and start 2018 off well.

“But clearly there is a lot of work to do, so we walk away with our heads held high, but go back and just get stuck into it.”

The podium run was set-up following a stunning opening stint from Warren Luff, who was the only co-driver to start the race in slippery conditions at Mount Panorama.

Luff coped admirably in the wet as he lifted the car from 20th on the grid to sixth when Pye took over.

The 41-year-old, who claimed his fourth Bathurst 1000 podium in six years, hailed the drive among his best at The Great Race.

Luff felt the skills honed from being a stunt driver at the Gold Coast’s Movie World theme park came to the fore as he battled the conditions.

“Not only was it a great result for myself and Scott but for the whole team,” Luff told Speedcafe.com.

“It has been a tough year for the team.

“To get such a great result it was really well-timed to deliver a long overdue result for the team in the light of the recent announcements.

“I had a lot of fun out there. I was little bit worried when it started to rain.

“The first stint wasn’t so bad the second was really bad. There was very poor visibility and aquaplaning, I went off through The Chase.

“It was tough but it felt like I was back at Movie World doing the stunt show, sliding cars around and having fun.”

Meanwhile, primary driver Pye described his maiden podium for the team as a much-needed personal boost.

“It is another race in my career that you take confidence from,” Pye told Speedcafe.com.

“It has been a tough few years and this is something I needed. Coming to Walkinshaw I feel like I’ve found a home here.

“It has been a tough year but the thing I have been most impressed about is the way the guys continue to work together. We haven’t given up and we didn’t at Bathurst.

“Standing on the podium and looking down and seeing the boys and girls smiling was a pretty good feeling.

“This has been a real energiser for the boys.”

The team remains sixth in the standings heading into next weekend’s Vodafone Gold Coast 600.