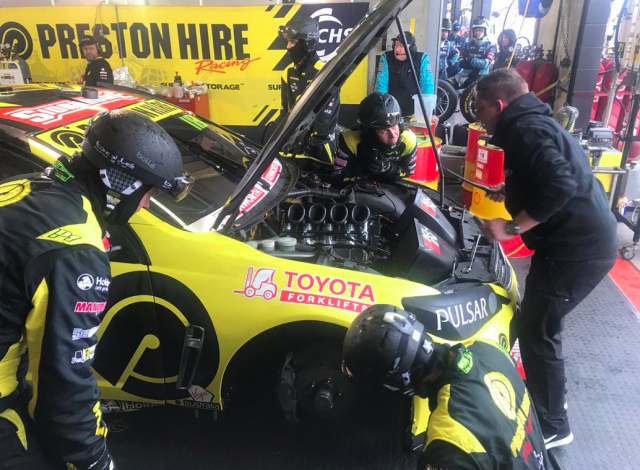 An unusual engine component failure for Preston Hire Racing at the Bathurst 1000 has triggered KRE Race Engines to evaluate units it supplies to Supercars teams.

The move has been sparked after Lee Holdsworth and Karl Reindler were forced out of the Great Race on Sunday when a brand new engine suffered a camshaft thrust bearing failure on lap 76.

Preston Hire Racing had been running inside the top 10 prior to the problem, which saw the camshaft bearing seize and move forward, knocking a sensor that prevented the engine from re-firing.

It was the second time in as many years that the team’s Bathurst tilt had been ended by an engine failure.

As a result Brisbane-based engine builder KRE will now investigate engines it supplies to Triple Eight and customer teams including Tekno Autosports prior to the Vodafone Gold Coast 600 (October 20-22).

“We have got a relationship with KRE and they have recalled all the engines to have a look at this part,” Preston Hire Racing boss Charlie Schwerkolt told Speedcafe.com.

“It is just heartbreaking for us as we had an engine failure in 2016 after doing one lap and now another one after doing half the race. I’m gutted for Preston Hire and all of our partners.”

The issue emerged earlier this season when Tekno Autosports suffered the same failure during a Sydney ride day.

It has left KRE perplexed as the American built custom part in question is the same the firm has used in its engines since 2010.

Preston Hire Racing’s engine is currently with KRE with the company set to check over Triple Eight and Tekno Autopsort units this week.

“We are looking at all of them (engines),” Ken McNamara (KRE Engines) told Speedcafe.com.

“We are guessing that it could be a (component) batch issue.

“Most of our Dunlop Series motors haven’t had any issues but they are using last year’s batch.

“We haven’t seen any issues with them and they have done a lot more mileage.

“This batch appear to be wearing out after two or three thousands kilometres. We think it is something (wrong) in the part.

“At the moment we are checking them and replacing them if necessary. It was odd for that one to wear out so quickly at Bathurst.

“All we can do is keep checking the part and work with suppliers in the US, and because it is custom made part you can’t replace it with anything else.”

The issue is not linked to the failure suffered by Red Bull Holden Racing Team’s Jamie Whincup in Sunday’s Great Race.

The six-time Supercars champion dropped a cylinder after the engine suffered a broken valve.