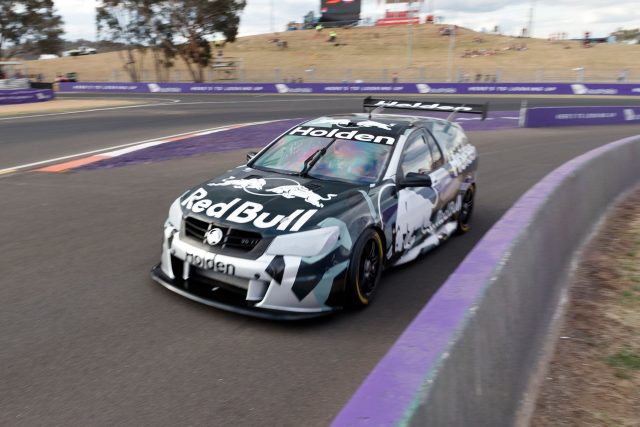 The V6 twin-turbo Holden has been met with mixed reactions from fans following its first public appearance at the Supercheap Auto Bathurst 1000.

Greg Murphy performed demonstration laps in Triple Eight Race Engineering’s Holden Sandman during the weekend, giving fans a taste of what the new powerplant will sound like.

The engine is based on that used by the factory Cadillac GT3 program and General Motors in America, producing a raspy sound common to smaller capacity turbo-charged engines.

Speedcafe.com canvassed opinion among fans at Mount Panorama and met with differing opinions.

Graham, a 50-year follower of Supercars and its predecessors, enjoyed his first live experience of the sound.

“I saw the news of the V6 turbo Holden in the paper, and wanted to come see it at Bathurst to hear what it sounds like,” said the Victorian Ford and Nissan fan.

“To be honest, I’m actually quite happy with what I have seen so far.

“The car does sound quiet, and it certainly sounds like a V6, which is something that might turn fans away if they are too used to the loud V8s that we have now.”

Mobil 1 HSV Racing supporter Anthony says he was similarly won over after seeing the car out on track, comparing the engine to that of a GT car.

“I really like the new V6 Holden,” said the Sydneysider.

“At first I had some reservations but on track it’s probably better than what I expected.

“It has a good sound, very GT-esque and I think it’s good.

“It was different but cool to see Greg Murphy driving the car; awesome to see him back in a race car and turning laps around Bathurst.”

Queensland resident Fiona, on the other hand, will miss the V8 sound when the V6 is implemented in the 2019 season.

“I’m not sure what to think of the new Holden,” said the Prodrive and Scott McLaughlin fanatic.

“It’s alright, sounds pretty cool on track but I am certainly going to miss the V8.

“A lot of people seem to be completely against it, but I kind of sit on the fence.

“There are plenty of positives and negatives about the car.”

Steve from southern Sydney, a dedicated Supercars fan who first attended The Great Race in 1972, was less concerned.

“I’m really open minded about the new V6 twin-turbo Holden, and I have been impressed by the development of the car,” said the Craig Lowndes and Jason Bright follower.

“I was around in the ‘70s when they had V6s and that worked well back then. It’s no surprise that Triple Eight are pioneering the way with the new era of Supercars.

“I accept the sound; it’s a V6 and that’s what a V6 sounds like so it’s not an argument I can make.”

Ryan is a relatively new fan, having followed the category for less than a decade, but the Sydneysider was highly enthusiastic about the new powerplant.

“I absolutely love the new V6,” he said.

“I think it’s the future of Supercars and it’s great to see Triple Eight Racing take the initiative and get the ball rolling.

“There’s a lot that needs to get done still; obviously the car is currently in development but the signs are promising.”

Nissan fan Maria, however, was less fond of the engine note.

“I like the car aesthetically; it sounds a bit weird compared to what the current cars do,” she stated.

“It’s my first ever Bathurst 1000, but I have been to other events and I really like the current V8s.

“I think the V6s won’t be welcomed in too highly.”

The V6 twin-turbo will see its first competitive action as a wildcard entry at selected Supercars events in 2018 before full implementation the following season.