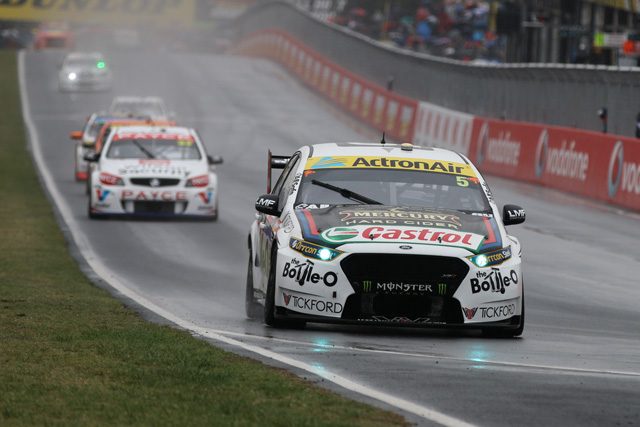 A dejected Mark Winterbottom felt he threw away a good result in Sunday’s Supercheap Auto Bathurst 1000.

The Bottle-O Falcon driver crashed out of the race on the penultimate lap, hitting the wall on the approach to Forrest’s Elbow.

He had been running fifth at the time, a result he would have been pleased with after struggling throughout the race.

“We could have finished fifth or sixth which would have been a good result, but I threw it away at the end,” Winterbottom told Speedcafe.com.

“We were struggling, it was pretty loose, and it just hit the line or whatever happened and lost the rears. Tough day, frustrating to finish like that.”

Having qualified third, Winterbottom slipped down the order in the opening stages of the race, handing the car to Dean Canto in seventh place on lap 18.

The pair then swapped duties throughout the race until Winterbottom climbed aboard for the run to the flag on lap 114.

With a spate of safety cars, the team then kept the 2013 race winner’s car topped up as the race became a fuel economy run in the closing stages.

By pitting under the safety car on lap 136 Winterbottom rose through the field as those ahead stopped, promoting him to fifth in the dying stages of race, but that is the most he could have got from the race.

“We didn’t have the pace, so it wasn’t our race,” he surmised.

“Reynolds drove away so he was quick enough, so he did a good job.

“They pulled Safety Cars out for weird things. It was a tight race, but he still won it easy at the end; he did well.”

Jason Bright and Garry Jacobson finished best of the Prodrive Falcons in eighth position, the latter having driven a particularly strong double-stint during the worst of the rain.

The other two cars out of the Campbellfield stable fell out of contention due to strategy and then an incident with Garth Tander at Hell Corner on Lap 145, with Chaz Mostert and Steve Owen last on the lead lap in 10th, while Cameron Waters and Richie Stanaway finished 16th.