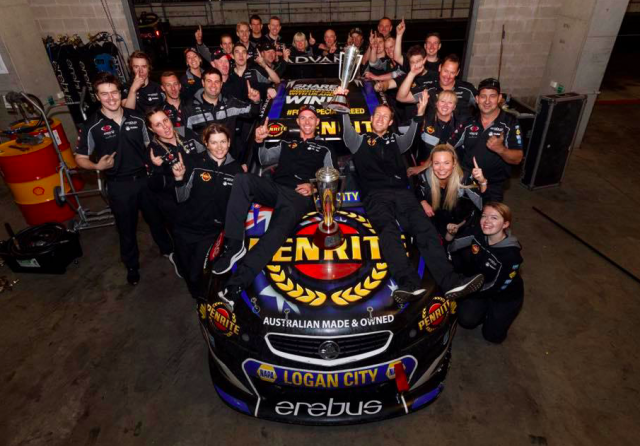 Prior to Bathurst, race wins have been shared amongst the championship’s top three teams during a campaign that has seen Penske flex its extensive resources, raising the bar for the rest of the field.

However, Erebus bucked the trend last weekend by outsmarting and outperforming its rivals with a fraction of the budget and personnel. The victory was coupled by a fourth place for Dale Wood and Chris Pither in the sister entry.

Sunday’s win was the team’s first following a restructure headlined by the abandonment of its Mercedes AMG program in favour of customer Holden Commodores, along with a move from the Gold Coast to Melbourne.

This season the squad has enjoyed a rapid transformation in performances on track, which Ryan puts down to a close knit group of passionate hard working staff.

“Everyone in pit lane works hard. We don’t over analyse and we keep it fairly basic and the basics work.

“I’m proud of the whole team. It has been a massive effort from where we were last year.

“We were shocking at Bathurst last year. We were not working as a team, we had rubbish pit stops and driver errors, and now we are smooth.

“There are no errors in pits stops and minimal driver errors and whatever mistakes we had were minimal.

“The bunch of guys we took on last year were all fresh to Supercars and we have just trained them the way we wanted them.

“We are just managing the guys well and they just want to win, they are passionate about it. It is not just a job (to them).”

It is a view shared by Bathurst winner Reynolds, who has found a home at the operation after being ousted at Prodrive at the end of 2015.

“Everyone from our little team, we’re all very different and some of us are rejects from other teams, like myself, so it’s a winning formula,” said Reynolds.

However, the small team model appears to be under threat as Supercars continues to attract high-profile international giants.

This follows the arrival of Penske in 2015, who took over Dick Johnson Racing and has since turned the outfit into a championship contender.

Despite the growing trend, Ryan believes his squad can maintain its success by sticking to its now tried and tested principles.

“Obviously in terms of resources there are things we could do if we had bigger and better resources, but then we would probably make it a bit more complicated,” he added.

“Our key at the moment is to keep it simple. If we start thinking we are better than we are, then that is where we will get hurt.

“We will just forget those big teams and pretend we are equal and just race.”

Erebus Motorsport will now focus on the final round of the Pirtek Enduro Cup at the Vodafone Gold Coast 600 from October 20-22.