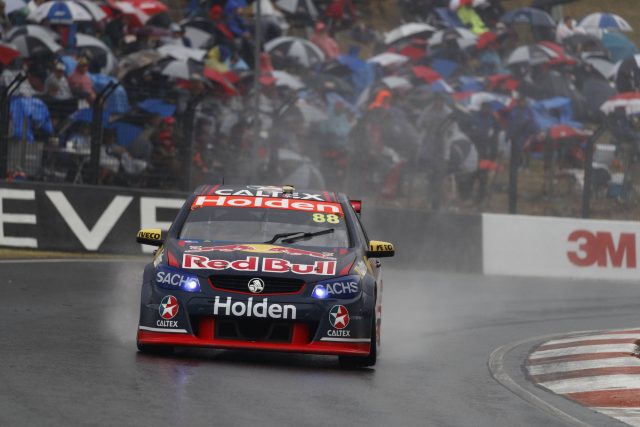 Triple Eight says an investigation will be conducted to understand the cause of a rare engine failure that ended Jamie Whincup and Paul Dumbrell’s Bathurst 1000 bid.

The #88 Red Bull Holden had been running inside the top five for the first half of the race following an impressive opening stint from Whincup, who started 11th on the grid.

However, drama struck on lap 119 when the car dropped a cylinder, prompting a lengthy period in the garage.

Whincup briefly returned before further work was carried out by the team to allow the car to take the finish in 20th spot, and score crucial championship points.

The problem was initially diagnosed as a rocker issue but it has since been confirmed that a valve failed, which has left the operation perplexed.

“We thought it was a rocker issue but it wasn’t. It turned out to be valve issue and we are not sure what has caused it and why,” team manager Mark Dutton told Speedcafe.com.

“Kenny McNamara (KRE Engines) will go through all of that. It is very rare they have failures so we are a bit confused there.

“He was so well prepared going in as all our engines were fresh and the spares were fresh. It is very uncharacteristic for a valve to go so some investigation to be done.”

Triple Eight completed an engine change on the #88 on Saturday night as the outfit looked to understand the car’s straight-line speed deficit having struggled for pace all week.

“We just didn’t like our straight-line speed and we were 99.9 percent sure it wasn’t the engine,” added Dutton.

“We did it just as a back-to-back test. It is a hard test because it is three hours worth of work type of test, but it is something we wanted to prove that it wasn’t the case.

“It wasn’t the case as it made no difference. It was more of a chassis issue.”

Although disappointed by the problem, Whincup felt his car had shown an improvement in pace from qualifying to the race, and was glad to salvage some championship points.

“We were sitting in there, we were circulating around, the car was good, we were just waiting for the end of the race and bang, our day changed very quickly,” Whincup told Speedcafe.com.

“You never want to gain points like that, you want to go out there and scrap it out and be there at the end to battle it, but unfortunately for car 17 (McLaughlin) and us, we weren’t able to battle it out today which is a shame.”

Whincup remains second in the championship but has jumped ahead of McLaughlin (Shell V-Power Racing).