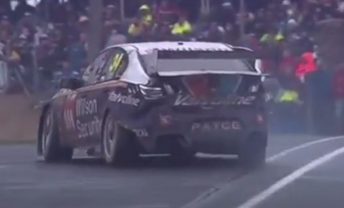 James Moffat has expressed his disappointment at throwing away a potential podium and eventually completely crashing out of the Supercheap Auto Bathurst 1000.

Moffat was running third on Lap 138 when he lost the rear of the Wilson Security GRM Commodore at McPhillamy Park and backed through the gravel into the tyre wall.

His race was over altogether four laps later when he slapped the wall at Sulman Park.

Adding to the deflation at Garry Rogers Motorsport, Garth Tander slipped off the track at the subsequent restart, setting off a chain reaction which saw him hit the wall at The Cutting three laps later.

“I’m just really, really gutted for the team because they deserved a better result than that,” a devastated Moffat told Speedcafe.com.

“We had both cars in a really good position towards the end and the way it all unfolded with myself and then Garth, I just feel for all the boys in the team.”

Moffat, who was driving with Richard Muscat, admitted that he was surprised by the nature of the first incident, but took full responsibility for both crashes.

“The first one at McPhillamy, I’ve obviously just made a mistake and went in there and lost the rear at entry; I didn’t really feel like I did anything different from the lap before,” Moffat explained to Speedcafe.com.

“In the second one, I just ran it wide, the car stepped out on me right at the Grate, and that pitched me into the damp stuff.

“When there’s a dry line and wet verges, at the speeds you’re going, you’re just a passenger.”

While the 33-year-old was not seriously injured, he did describe the impact as the biggest in his career, paying tribute to the safety features of the car.

“It was a decent old hit. I haven’t had one that big, so thankful for all the safety in the cars, especially the leg protection stuff; there’s no doubt that did its job.

“I reckon I’ll wake up tomorrow a bit sore but I’ve only got myself to blame.” 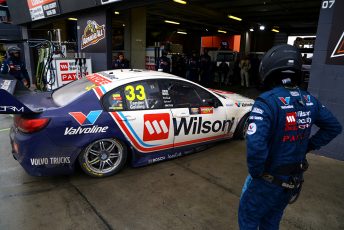 GRM still had hope of even a win when Tander lined up second for the subsequent restart on lap 145, but didn’t even make the control line before he and leader Shane van Gisbergen both ran off at Murray’s Corner.

Making matters worse, Tander was then turned around and hit repeatedly by Chaz Mostert at the next corner, damaging car #33.

The three-time winner went on to hit the wall at The Cutting on Lap 148, ultimately finishing nine laps down in 18th in the car he shared with James Golding.

Tander said that he was taken aback by the extent of water on the circuit, given how light the rain had appeared from the driver’s seat.

“Just as we were leaving The Chase, there was starting to get a couple of spits on the windscreen and you sort of think, ‘I’ve got enough tyre temp and it’s not going to affect the track that much,’” he explained to Speedcafe.com.

“Obviously both Shane and I got down there and it was just like ice; (I) just (went) straight off.

“Shane was way off and I managed to get around and through the gravel trap and get going again and not lose as many spots.

“But then I was obviously pretty wide at (Turn) 1 and (Mark) Winterbottom got up the inside and then Chaz (Mostert) hit me.

“I didn’t know he was three-wide up the inside when he hit me (but) he got a penalty for it.

“That damaged the car quite a bit, it bent the rear toes, bent the front splitter, so then I was actually trying to drive really conservatively and I probably just gave the wall too much room through the kink into The Cutting.

“I lost the rear and rattled into the wall.”

Tander, who also came excruciatingly close to winning the race last year before the major incident with Jamie Whincup and Scott McLaughlin, confirmed that he had thought he had been gifted the race lead by van Gisbergen for the briefest of moments.

“It was just way wetter than I think either of us expected it; it’s frustrating.

“It was obviously a tough day for the team with Moff as well so they didn’t deserve that; they did a really good job today and just got nothing to show for it.”