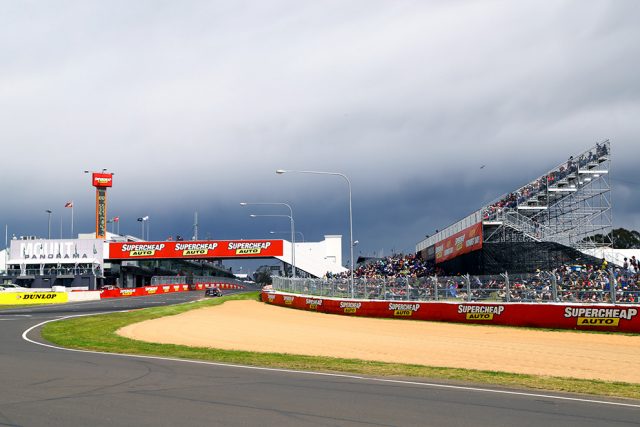 Weather forecasts are predicting a 70 percent chance of showers to hit Mount Panorama during the race with a possibility of a thunderstorm in the afternoon.

Officials have been aware of the impending weather and offered teams the chance to use wet tyres in Saturday’s Practice 6.

Teams are fully expecting rain to intervene adding to the variables to consider when planning strategies for the 1000km endurance race.

Pole-sitter Scott McLaughlin says he is unconcerned by the threat of rain and how it will affect the speed of his #17 Shell Ford, he will share with Alex Premat.

“I’m excited but I will take it as it comes, as it is the same for everyone,” McLaughlin told Speedcafe.com of the predicted weather.

“I know I’m fast in the rain and the dry we have just got to try and make the most of it.”

The weather forecast has been met with frustration by Erebus Motorsport team manager Barry Ryan, following his team’s impressive showing in the dry.

David Reynolds has been among the quickest of the Holden runners, scoring an impressive second on the grid in the Top 10 Shootout.

“It is just a bit frustrating because we have got a good dry weather car,” Ryan told Speedcafe.com.

“It takes a lot of years to get a car that you think is capable of winning and then all of sudden it is wet.

“Usually a good dry car here is good in the wet,” he added.

“We are not scared about the weather it is just frustrating because we think we can do a good job in the dry.”

However, Prodrive team principal Tim Edwards expects the rain to turn the race into even more of a lottery.

Edwards has also confirmed that all four Prodrive cars will remain on the Project Mu brakes after undergoing a manufacturer change amid safety concerns with the PFC01 brand and the new AP Racing disc.

“The reality is as soon as the rain comes it throws everything up in the air, it doesn’t matter even if you put a wet set up on your car,” Edwards told Speedcafe.com.

“Different people will put on a set-up of varying degrees, and that will, it will swing in your favour sometimes and swing away at other times.

“It is almost impossible to read the script for when it is wet.

“Fortunately I have drivers who love driving in the wet, so that is a helpful addition.

“But at the end of the day it always turns it into more of a lottery when the rain comes, particularly if it is the magnitudes that we are talking about.”

Meanwhile, Supercars tyre supplier Dunlop is prepared for such conditions if they arrive with an increase to the tyre allocation.

A decision late last night will see teams issued with an extra set of rubber meaning they will have 28 tyres per car.

“We are ready to go, we have enough to cover everybody for what they need and see what happens,” Dunlop Australia boss Kevin Fitzsimons told Speedcafe.com.

“Forecast is a bit quirky at the moment, a lot of them are saying the rain is coming after lunch.”

Light rain was forecast to begin falling in the early hours of the morning before steadily increasing in intensity from 1300 until 1600 AEDT.

The Supercars field will participation a 20 minute warm-up before the start of the Great Race scheduled for 1110 local time.