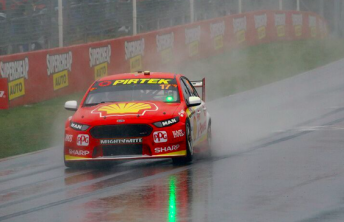 The pole-sitters and race favourites encountered a suspected engine and electrical issue around the lap 45 mark with Premat at the wheel, which dropped the car out of contention.

Premat was instructed to make an unscheduled stop 10 laps later as the team tried to fix the problem.

The Frenchman continued behind the wheel until the Falcon ground to a halt on lap 75 at The Cutting, which brought out the first Safety Car.

McLaughlin had led the race from pole position in tricky wet conditions before he surrendered the advantage when he ran on at Murray’s corner on Lap 2.

The Kiwi recovered well to climb back into podium places before handing over to Premat.

“It’s pretty hard but you know, we were battling anyway. We were struggling there,” said McLaughlin.

“But to all our fans, our sponsors, Shell V-Power, it’s tough, but we’re still one car left there and cheer on Fabs (Coulthard) to the end.

“I’m not sure (what happened) he just said that he lost oil pressure.

“There was no smoke or anything but he could have just dropped something but until we get it back or whatever, I think we’re pretty done unfortunately.”

The team remains unsure if an electrical issue may have contributed to the eventual failure.

Cameron Waters and Richie Stanaway led Erebus Motorsport’s David Reynolds and Luke Youlden, while the Red Bull Holden of Jamie Whincup and Paul Dumbrell was third at the time of the stoppage.